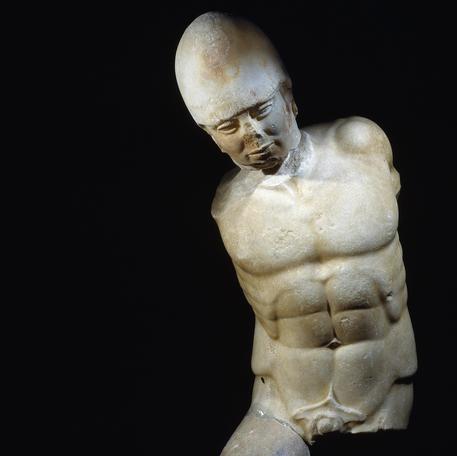 (ANSA) - London, April 20 - London's British Museum has opened a show titled "Sicily, Culture and Conquest", which tells of the splendor of the island's multi-millennial history, built by tyrants, great philosophers, invasions, cultural contamination and periods of open-mindedness that few other parts of the world can boast, in Europe and beyond.
The show, put on by an institution of symbolic importance from a northern island and dedicated to the masterpieces and ancient roots of a fascinating island in the south, was realized in cooperation with the Region of Sicily and inaugurated on Tuesday by the Italian ambassador to the United Kingdom, Pasquale Terracciano.
Top newspapers have hailed the exhibition as one of the main cultural events of the season in the British capital.
It brings together thousands of objects from the Greek epoch through the Norman period - gold inherited from classicism to contemporary sculptures from the admirable Palatine Chapel - many of which have never before left Sicily.
These are the vestiges of a land that, as the ambassador commented, conceals in its past the imprint of "super power".
Throughout the centuries, Sicily played a strategic role in the Mediterranean, and represented - at least at times - a model for peaceful and harmonious coexistence, an example that has something to contribute still today.
This model saw coexistence between the Arabs, Christians, Greeks and Jews who prospered together in the court of Norman King Roger II, which, in the words of today's diplomat Terracciano, was a very powerful "message of peace" still relevant in a time when the Mediterranean finds itself involved in migrant tragedies and in which its shores echo the threat of terrorism.
The myth, but also the reality documented by the Trinacria "felix", filtered by a story that - from the first traces of 2000 BC through the Phoenicians, Greeks, and Romans, the Arabs, the Normans, the Angevins, the Aragons, the Kingdom of the Two Sicilies to a united Italy - has captured the attention of the press and commentators from across the Channel, as with Jonathan Jones in the pages of The Guardian, where he focused particularly on the Norman chapter in Sicilian history.
The Normans left a footprint of conquests and victories on the British island as well, on their way up from the south, as shown by scenes from the celebrated Bayeux Tapestry.
But if in the memory of the lands of Britain the Normans hold a certain reputation for ferociousness going back to the decades of the Middle Ages following the year 1000 ("victims" perhaps also of the popular legend of Robin Hood), in Sicily they undoubtedly touched on heights of good government and a profitable mix between cultures that was unthinkable at the time.
The show in London seals this moment in time with the deep and imperious look of a marble bust of Frederick II, the king who, the Guardian remembers, earned the name "stupor mundi" (wonder of the world) in the Medieval Europe of the 13th century, a time in which the entire island - even with its highs and lows - still aims to reflect itself.