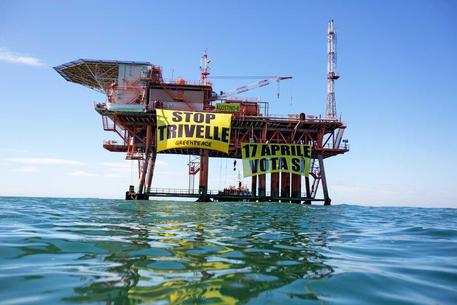 (see related)(ANSA) - Rome, April 18 - Promoters of a failed anti-offshore drilling referendum said Monday they saw victory in defeat, because the fact that it was held at all has forced the government to change tack on its energy policy.
"There have been modifications to norms proposed by the government and approved by parliament," said the Campania delegate for the Committee for a Yes Vote, Francesco Borrelli. "That is not demagoguery. Petroceltic and Shell have given up. The prospecting permits have been blocked. If that has happened I think it is a victory". Borrelli said in spite of the fact just 31% of voters turned out - which means the referendum failed to muster the 50% plus one nationwide quorum - the referendum in itself "has laid a groove that will take Italy more and more towards renewables and further and further away from oil".
Constitutional expert Enzo di Salvatore - who wrote the referendum question - said the vote was a success because without it, "we would have 27 ongoing procedures for concessions within 12 miles (of Italy's coasts), we would have the Ombrina Mare well in front of Abruzzo. Instead, Shell and Petroceltic have left".
"Thirteen million citizens have said they disagree with current energy policies," said the Calabria committee delegate, Arturo Bova. "We will work together towards a new energy policy".
Some leaders slammed Premier Matteo Renzi for celebrating the fact that two-thirds of voters stayed home.
CGIL union federation leader Susanna Camusso said this is wrong because voting legitimizes politics and the low turnout "did not measure up to the need for participation in this country".
Tuscany Governor Enrico Rossi from the Renzi's Democratic Party (PD) told ANSA he was against the referendum - which was called on request of nine Adriatic coastal regions plus environmentalist groups - but at the same time he slammed Renzi's attacks on regions who wanted the referendum.
"Renzi thinks he can do without the regions," Rossi said.
"I hope this attitude will change, because you can't rule the country solely and entirely from the premier's office".
Opposition rightwing Northern League chief Matteo Salvini said "Renzi is laughing now, but he who laughs last laughs best". On his popular blog, anti-establishment 5-Star Movement (M5S) chief Beppe Grillo thanked "more than 15 million voters who said YES to democracy and a future with clean seas, renewable energy, energy efficiency and sustainable tourism".