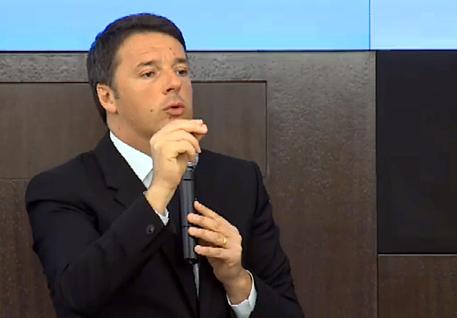 (ANSA) - Lampedusa, March 25 - Italian Premier Matteo Renzi said after a migrant management meeting on the island of Lampedusa Friday that the EU can't ignore "great emergencies". He said "a message goes out to Europe from Lampedusa: this is not periphery, far from the eyes of Europe but a place of beauty that has enabled thousands of lives to be saved." He said "we must not think that you can pretend nothing is happening when faced with the great emergencies of our time, or be superficial. The people of Lampedusa have taught us to stay human. It is Europe's task to hold together our identity with our values". Renzi said that "I would like to thank today, March 25, the mayor and all the women and men of Lampedusa. March 25 is the birthday of Europe, the founding signatures of the treaties of the European Economic Community were penned on March 25, 1957 in Rome. "And today we are in the centre, the heart of Europe.
Perhaps it is not a geographical heart, but a more spiritual one. It is the point in which all European citizens have shown all the others what must be done with great humanitarian values".
Renzi said that "we are here today when there is no emergency because Lampedusa is also and above all a very beautiful island. "Here are the protagonists of (the Golden Bear-winning film) Fuocammare. Lampedusa is an experience of values but also very beautiful for tourists." He said "it is right to describe Lampedusa as a very beautiful place. From abroad it is difficult to get here and Lampedusa sounds like a place in difficulty but it is one of the places where the sea is most beautiful. It is our civic duty to recall that. Because tourism is also an economic opportunity for the island's inhabitants".
Renzi insisted that he did not regard Lampedusa as part of Italy's periphery but such a "central" place that it simply had to be visited.
Lampedusa "must be a living and lived-in place. It is not the periphery of Italy. For us the island is so central that today we are here. Concrete responses are needed," he said during a meeting with local Mayor Giusi Nicolini.
Lampedusa, a stepping-stone island closer to Africa than to Italy, has long struggled to cope with an influx of migrants and refugees who make the perilous sea crossing from Libya.
The EU should make Lampedusa a "free zone", Renzi said. "There is a historic request for a free zone that would be very opportune on Europe's part to grant. Because it is practically a restitution," he said.
He also said that the Italian Serie B, soccer's second division, has been working with sports authorities on the island to build a soccer pitch there.
"It'll be a beautiful pitch and I'll be the ref," he quipped. Renzi added that Lampedusa was the "front line and the gateway to the EU, it makes us proud".