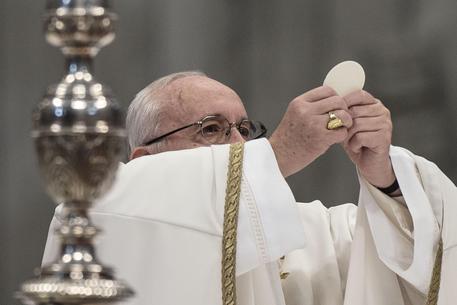 (ANSA) - Rome, March 24 - The mercenary greed of arms traffickers is behind the bloody March 22 Islamist terror attacks in Brussels, Pope Francis said during his homily as he celebrated Holy Thursday Mass at an asylum seeker reception center near Rome. "Behind the act of war and destruction in a European city...there were others...the arms manufacturers and traffickers," he said. In the same way, those behind Judas paid him 30 pieces of silver to turn Jesus over, Francis said.
He pointed to two contrasting actions to drive home the importance of believing in peace and brotherhood.
"All of us here together - Muslims, Hindus, Catholics, Copts, Evangelicals - are all brothers and children of the same God who want to be integrated and live in peace: one action," he said.
"Three days ago an act of war and destruction in a European city was carried out by people who do not want to live in peace - but behind that act as behind Judas there were others...the arms manufacturers and traffickers who want blood not peace, war not brotherhood". Francis went on to explain the significance of his act of washing the feet of asylum seekers as Jesus washed his disciples' feet.
"In this moment when I will carry out the same act as Jesus in washing your feet, we are all of us together making an act of brotherhood and we all say: 'we are diverse, we have different cultures and religions, but we are brothers and we want to live in peace'".
"May each in his own tongue pray the lord so that this brotherhood becomes contagious in the world, so that there will no longer be 30 pieces of silver to kill one's brother, so that brotherhood and goodness will always remain".

He then washed the feet of 11 refugees and an Italian staffer at the asylum seeker center, located in the town of Castelnuovo di Porto north of Rome.