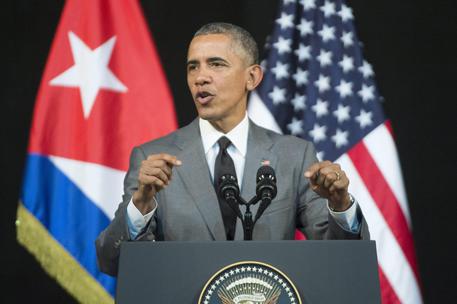 (ANSA) - Havana, March 22- U.S. President Barack Obama said on Tuesday that he had come to Cuba to "bury the last traces of the Cold War" in a speech in Havana's Grand Theater where he was received with a standing ovation.
Tuesday is the last day of Obama's historic three-day visit to the nation that hasn't seen an American president on its soil since Calvin Coolidge in 1928.
He said it was time the U.S. commercial embargo against Cuba ended, though he did not give a precise idea of when that might happen.
"What we have done in the past 50 years has not served neither our interests nor the interests of the Cuban people," he said.
The embargo represents an "obstacle" to development in Cuba and a new route would open up for the country only after it is lifted, he said. He added that there was increasing interest in the U.S. Congress for the embargo to go but it was linked to issues including human rights and implementation of agreements signed.
He also thanked Pope Francis and Cuban Cardinal Jaime Ortega for their "patient mediation work" which he said had contributed decisively to the reconciliation between the two countries.