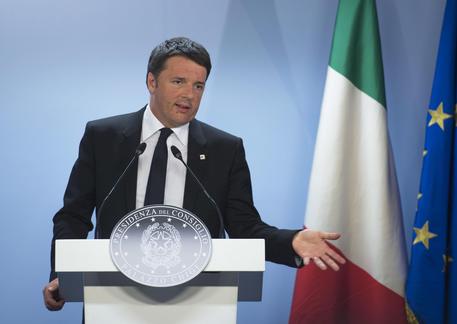 (ANSA) - Brussels, March 18 - Premier Matteo Renzi said after an EU-Turkey summit that a bilateral deal on migrants signed Friday respects "the requisites we gave ourselves... now we need to ensure it works as best as it can".

"It respects the parameters we - and not only we - had set: there is an explicit reference to human rights, freedom of the press, and the founding values of Europe".

"If we manage to save even just one child thanks to this accord, we will have done our duty," the Italian premier said.

Renzi also said the deal signed today "refers explicitly to Libya and Africa". "To those who ask us to help them in their home countries, we say the road is one of international cooperation. Now the point is to translate words into actions," said the premier, adding he is satisfied with the accord's "comprehensive approach".

The return to Turkey of refugees who have illegally entered Greece will start April 4 under a new EU-Turkey migrant deal, German Chancellor Angela Merkel said after the summit .

"All forms of collective expulsion will be banned and international standards and the principle of non-refoulement will be respected," a final joint declaration by the EU and Turkey said. These are "temporary and extraordinary measures", the document said. Non-refoulement is a principle of international law which forbids the rendering of a victim of persecution to his or her persecutor.

A joint EU-Turkey statement on migrants said Friday that "the first list of concrete projects for refugees (health, education, infrastructure and living costs) will be identified by the EU and Turkey within a week" and once the first three billion euros have been fully used "the EU will mobilise additional funding for another three billion euros by the end of 2018".