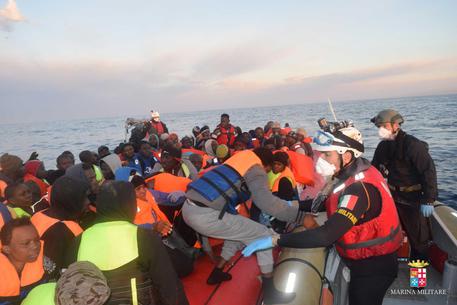 (ANSA) - Brussels, March 16 - The European Commission on migrant resettlement told Italy Wednesday thta it should set up more centres for the repatriation of migrants. "The reception sites for migrants who must be repatriated remain extremely limited and below the threshold declared in the road map, with serious challenges for the rapid enactment of repatriation operations," it said.

European Commission First Vice-President Frans Timmermans said Wednesday that under a 'one in, one out' migrant deal to be finalised with Turkey "there will not be blanket repatriations or push-backs". He said the deal to be hopefully sealed at an EU summit later this week "will respect EU law and international law". He said "the last thing we want is for Idomeni to become the rule," referring to a bursting refugee camp on the Greece-Macedonia border which refugees have been sent back en bloc to. The EU-Turkey deal does not mean that Europe "will turn its back on refugees," he said, stressing that the goal is to dismantle the human-trafficking business.

Premier Matteo Renzi told the Lower House on Wednesday that he agreed with reaching a deal with Turkey for cooperation on the refugee emergency, but added that there are conditions. "It's right to reach an agreement with Turkey but there are principles that are fundamental for us, starting with human rights and press freedom," Renzi told parliament before this week's EU summit at which a deal with Turkey is expected to be finalised. At a recent summit, Brussels and Ankara reached a broad agreement for the EU to accept refugees currently in Turkey in exchange for the return of economic migrants in the EU. Ankara also wants an extra three billion euros in aid on top of the three billion the EU has already pledged.