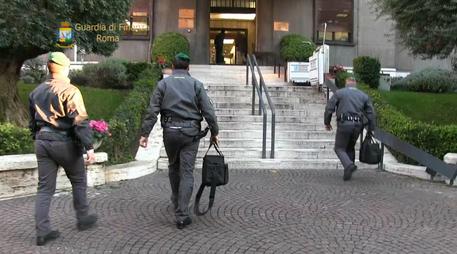 (ANSA) - Rome, March 11 - Finance police on Friday acted to execute 19 arrest warrants in relation to a probe into alleged corruption at highways company ANAS. Managers and officials at the company are implicated, along with a lawyer, a politician and entrepreneurs whose firms have won mayor public works contracts. Friday's operation, involving searches of properties to obtain evidence and over 250 police officers, is the second part of an investigation that exploded in October into alleged kickbacks paid by entrepreneurs to ANAS officials to win contracts. The politician under investigation is Marco Martinelli, a 53-year-old lawmaker for Silvio Berlusconi's centre-right Forza Italia (FI) party, sources said. Martinelli allegedly guaranteed a businessman that a tender commission would be headed by someone "not hostile" to his bid for a contract in Sicily.
The finance police said 36 people were under investigation in the second part of the probe, which uncovered alleged "systematic" corruption.
The police said the corruption was not limited to manipulating the awarding of tenders.
They said it also influenced the timing of payments, the failure to apply target-related penalties and the payment of damages for the dispossession of property.
A Rome preliminary investigations judge wrote that there was evidence of widespread corruption at ANAS in the warrant for Friday's arrest.
The second part of the probe largely stemmed from Antonella Accroglianò, a manager nicknamed the 'black lady' who admitted to being involved in a web of graft after being implicated in the first part. In a statement, ANAS thanked investigators for Friday's operation and the help they are providing to enable the company to "clarify its past and put in order and protest the healthy part of the company, made up of the overwhelming majority of its employees". Former transport ministry undersecretary Luigi Meduri was among a number of managers and officials arrested in the first operation in October.