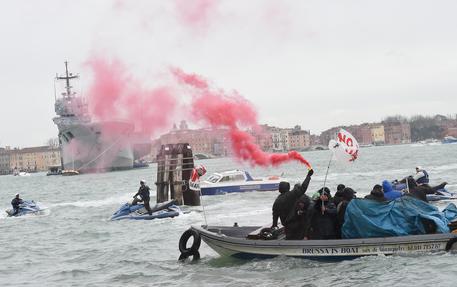 (ANSA) - Venice, march 8 - Boat-borne protesters against joint infrastructure projects ahead of a Venice summit between Italy and France on Tuesday clashed with police in the waters off the lagoon city.
The demonstrators, who sailed to Venice to protest 'major public works' such as a controversial high-speed rail link between Turin and Lyon, tried to get into the 'red zone' off St Mark's Square and were repelled with water-cannon from police vessels - to which they replied by firing red smoke bombs into the air.
The protesters are also demonstrating against the presence of large cruise liners in Venice.
The summit featuring Premier Matteo Renzi and President Francois Holland gets under way Tuesday afternoon.