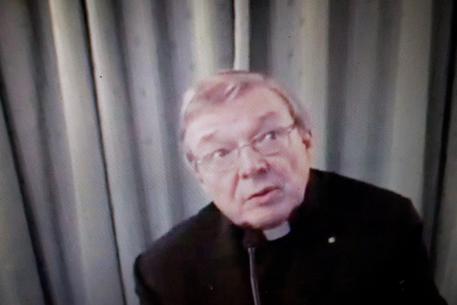 (ANSA) - Rome, March 3 - The head of the Vatican's Secretariat for the Economy, George Pell, testified for the fourth and final time late Wednesday to the Australian commission investigating sex abuse of minors in the diocese of Ballarat near Melbourne during the 1970s and 1980s, when the Australian archbishop was a priest there.
Speaking by video link from a Roman hotel, Pell was asked by lawyers acting on behalf of the victims to clarify a statement made during Tuesday's hearing to the effect that the abuse carried out by predator priest Gerald Ridsdale in various parishes within Ballarat was "a sad story but it was not of great interest to me". He said that he was "sorry for the choice of words".
"I was very confused. I answered badly," Pell said. The archbishop added that he thought it was a "disastrous coincidence" that so many pedophile priests had been assigned to Ballarat in the 1970s. Pell, who advised Bishop Ronald Mulkearns about the placement of priests within the diocese, is not under investigation and has denied knowing about the abuse.
Pell's lawyer Sam Duggan tried to demonstrate that the archbishop had had only limited contact with Ridsdale during the period in which he abused minors.
Pell was also questionned about another priest, Peter Searson, who died in 2009 and is accused of abusing minors in Ballarat from the 1970s onwards.
The archbishop said he did not remember a meeting during which a list was presented containing allegations of sexual abuse and violent corporal punishment carried out by the priest.
After the hearing Pell said he hoped the last four days "would help towards healing, to improving the situation".