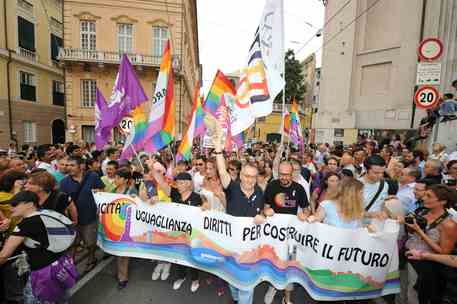 (ANSA) - Rome, March 1 - Rome's tribunal for minors has recognised a lesbian couple's adoption of each other's biological daughters, two gay rights associations announced Tuesday, adding that it was a first for Italy. The court upheld two appeals from lawyer Francesca Quarato, a founding member of the Rete Lenford (Lenford Network) gay rights group, representing the Famiglie Arcobaleno (Rainbow Families) association of gay parents and their children.
The court based itself on current legislation on "adoptions in special cases", which means the children - two girls aged four and eight - will have the same double-barrelled surname but will not be legally considered sisters.
Quarato explained that the special cases adoption law "confers lesser guarantees to the minor when compared to the recognition of full, legitimate parenthood" such as the children of heterosexual married couples currently enjoy.
However, the ruling does proved both children with more protection than they would otherwise have, she said.
"In this way, each (of the minors) has a biological parent and a social parent, both of them with full and equal parenting capacities and responsibilities," Quarato explained.
"The court... exclusively considered the minors' interest in having their relationship with their social mother recognized and protected".
Rete Lenford President Maria Grazia Sangalli and Rainbow Families President Marilena Grassadonia hailed the ruling.
"This is the only recourse same-sex couples have in order to legally adopt their partners' children, in the absence of a law on the matter," said Sangalli.
"Unfortunately, lawmakers are not contributing to the work of the courts... by promulgating norms that take reality into consideration," Sangalli added.
"All you would have to do is look at the world through the eyes of a child to know that safeguarding their affections is the only way to guarantee them a better life," Grassadonia said.
The Senate last week passed a civil unions bill recognizing gay couples and extending to them some of the same rights and privileges straight couples enjoy - minus a measure on the couples' rights to adopt each other's children, which was dropped on the demand of Catholic conservatives.

The anti-establishment 5-Star Movement (M5S) on Tuesday called for a referendum on adoptions by gay couples. "It is right to involve the Italian people on such important ethical issues," said M5S Lower House Deputy Speaker Luigi Di Maio.

Interior Minister Angelino Alfano, leader of the junior government partner New Centre Right (NCD), on Tuesday reaffirmed his opposition to "every kind of adoption" by same-sex couples and announced a new proposal to make surrogate motherhood a universal crime.

This prompted Justice Minister Andrea Orlando from the ruling center-left Democratic Party (PD) to tell Alfano to "lower your banners". He said that Alfano's proposed sanctions against surrogate motherhood were "reasonable" but that Italy needed a law on adoptions "that puts us on the side of the child".