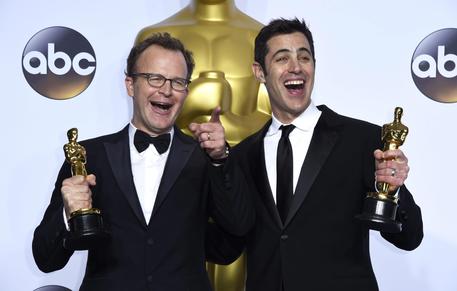 (ANSA) - Rome, February 29 - Producer Michael Sugar called on Pope Francis to "protect children and restore the faith" in an Oscar acceptance speech for his movie Spotlight in Los Angeles on Sunday. Tom McCarthy and Josh Singer's real-life drama traces the Boston Globe's 2003 Pulitzer Prize winning investigation by a team of journalists who expose a ring of pedophile priests.
Starring Rachel McAdams, Michael Keaton and Mark Ruffalo, the movie won best picture and best original screenplay.
Accepting the award, Sugar said he hoped the film's message would "resonate all the way to the Vatican".
"Pope Francis: it's time to protect the children and restore the faith," he said.
"This film gave a voice to survivors, and this Oscar amplifies that voice," said the producer from Open Road Films.
"We have to make sure this never happens again," said McCarthy, who directed the film.
The head of the Vatican Secretariat for the Economy George Pell testified late on Sunday to the Australian commission investigating sex abuse of minors and admitted the Church had committed "enormous mistakes" with regards to the abuse.
Speaking via video link from a Roman hotel, Pell said the Church had "disappointed the faithful" and "caused serious damage" but that it is "working to remedy" the mistakes.
The commission is investigating cases of abuse that occurred in the 1970s and 1980s, when Pell was a priest in the Ballarat diocese where abuse occurred.
Pell himself is not under investigation and has denied knowing about the abuse.
His testimony is expected to last three or four days total, and takes place from 10 p.m. to 2 a.m. in Rome, which is 8 a.m.
to noon in Australia. Fourteen abuse survivors flew to Rome to be present during Pell's testimony, financed by a fundraiser that collected more than 130,000 euros for the cause.
One of the those victims is David Ridsdale, nephew of Gerald Ridsdale, a priest who is currently in prison for having committed 138 counts of abuse against 53 victims.
Pell worked with Ridsdale in the Ballarat diocese.
Ridsdale's nephew has said in prior hearings that Pell not only ignored the abuse but also tried to buy his silence.
Also on Monday, Vatican daily L'Osservatore Romano wrote that Spotlight is not an anti-Catholic film because "it does not touch on Catholicism per se".
"It is undeniably a film with the courage to denounce cases that must be condemned without hesitation... the fact that an appeal to Pope Francis to combat this scourge came out of the Oscars ceremony must be seen as a positive signal," the Vatican daily wrote.