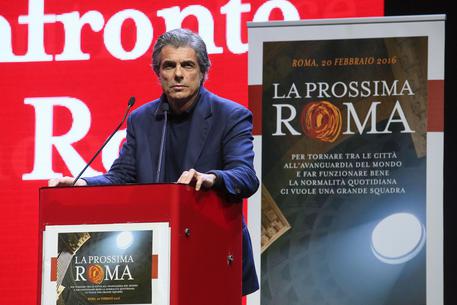 (ANSA) - Rome, February 29 - Confusion appeared to reign within the centre-right on Monday after the official centre-right mayoral candidate for Rome Guido Bertolaso lost unofficial primaries organised by the right-wing Northern League over the weekend.
The hastily organised poll was won by Alfio Marchini - a former city councillor running on a civic list - with 4,534 votes, followed by surprise new entry Irene Pivetti with 3,495 votes.
Ex-Lazio governor Francesco Storace of La Destra obtained 3,069 votes while the former civil protection chief polled 2,203 votes. "In this way the centre-right is set to lose and presents the biggest possible gift to (center-left Premier) Matteo Renzi," Salvini said. The Northern League leader then appealed to the four main candidates to "sit down and talk". "If everyone remains on their paths, those paths will lead to a dead end," Salvini said, calling on the centre-right to hold official primaries "as a tool for synthesis".
He was backed by former party secretary Umberto Bossi, who in an interview with La Stampa daily said official centre-right primaries were "the only way forward".
However, Bossi added that Salvini would now have to talk to ex-premier and center-right Forza Italia (FI) chief Silvio Berlusconi, who fielded Bertolaso earlier this month with support from Giorgia Meloni, leader of the small rightwing Brothers of Italy (FdI) party and, apparently, the Northern League leader himself. For his part, Marchini said in a statement "it is right to continue to seek a synthesis between the different political histories, which are an asset and certainly not a limit".
However "the elections to be won are in June", he added. "In order to win them we need to convince all those who no longer believe in the promises of the PD or the Five-Star Movement (M5S) to turn out to vote," the businessman said.
Meanwhile, the two main candidates in the centre-left primaries on March 6 continued their campaigns. Roberto Giachetti, deputy Lower House speaker and former cabinet chief under Rome mayor Francesco Rutelli, took a swipe at M5S candidate Virginia Raggi who on Sunday described a televised debate between the centre-left candidates as a "second-hand fair".
"There is a clear opposition between us, for example I think the Olympics should be used as a tool to relaunch the capital. I think she has a defeatist approach," Giachetti said.
Raggi has said she is opposed to the 2024 Olympics bid on grounds the city has more urgent problems that need to be tackled first.
Former executive city councillor for urban planning Roberto Morassut said the centre-left primaries would "once again" be the only "real democratic popular consultation".
"On March 6, debate will begin on the number of participants and whether 50,000, 60,000, or 70,000 people can be considered a flop. Let me quietly point out that the M5S has nominated a candidate with 1,700 online votes, while the centre-right candidates subject to the League's primaries all garnered under 2,000 votes - a regular pantomime," Morassut said. Morassut made the comment before the final results of the unofficial centre-right primaries had been announced.