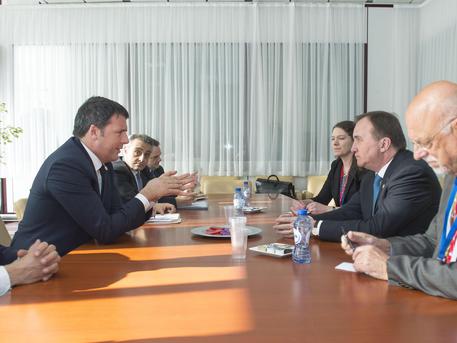 (ANSA) - Brussels, February 19 - Premier Matteo Renzi warned some EU states at a special summit in Brussels overnight that they risked losing EU funding if they fail to do their bit to address the asylum-seeker crisis. "Solidarity cannot just be about taking," Renzi said, according to ANSA sources. "The phase of planning 2020 funds is starting. Either you show solidarity in taking and giving or we bet contributor countries will stop showing solidarity too". The comments were praised by fellow EU founder members France and Germany, the sources said.
Hungarian government spokesman Zoltan Kovacc was quoted by the Tanjug agency as saying later in the day that Renzi's comments were tantamount to "political blackmail".
Also on Friday, Austria enacted announced caps on migrant and asylum seeker entries, over strong EU objections.
It set up controls on its side of the Alpine Brenner Pass at the border with Italy, and capped at 37,500 the number of asylum seekers it is willing to take in this year - a quota it expects to reach by May, according to Austrian Vice Chancellor Reinhold Mitterlehner. Austrian Interior Minister Johanna Mikl-Leitner has fixed daily entry quotas at 80 for people seeking asylum in Austria and at 3,200 for people passing through on their way to another country. Such moves "would be clearly incompatible with (Austria's) obligations under EU and international law," European Migration Commissioner Dimitris Avramopoulos wrote Mikl-Leitner in a letter of which ANSA obtained a copy on Thursday. Avramopoulos came out against quotas for asylum seekers traveling through the country and urged Austria to "reconsider the unilateral measures proposed".
On Friday, Austrian Chancellor Werner Faymann defended the move.
"If every country were to decide the same (as we did, in proportion to their population), we could distribute over two million refugees," he explained.
"Our country has always been pro-Europe, we have always given aid when necessary - during the Hungarian crisis, during the old Yugoslavian crisis" the chancellor continued. "Last year, we took in 90,000 people. Now we did not say that because of this, we wouldn't take in anyone else this year - we said we would accept more than 37,000," Faymann said. "The rest is up to others".