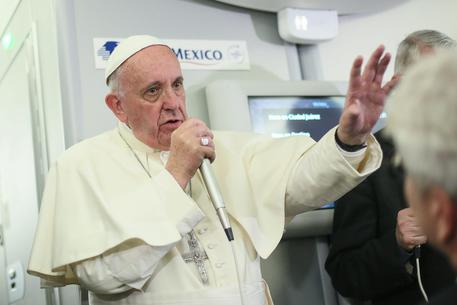 (ANSA) - Vatican City, February 19 - Vatican spokesman Father Federico Lombardi said Friday the pope was not targeting US presidential hopeful Donald Trump per se in comments yesterday that those who would build walls not tear them down are not Christian.

"The pope said...we must not build walls, but bridges," Lombardi told Vatican Radio. "He has always said so. all the time, and he has said so many times concerning the issue of migration into Europe - so it is not at all a specific issue limited to this case".

"In no way did (the pope's comments) intend to be a personal attack, or an indication of how to vote," Lombardi said.

Republican real estate tycoon Trump has pledged to build a wall along the US-Mexico border to keep undocumented migrants out if elected. The pope made his comments Thursday on his way back to the Vatican after an apostolic visit to Mexico.

Also on Friday, Trump appeared to backtrack from the apparent tiff with the pope when he called Francis "a wonderful guy", CNN reported. The billionaire reportedly said he is ready to meet the pope "whenever he wants" and that Francis' comments were probably not as harsh as media reported them.