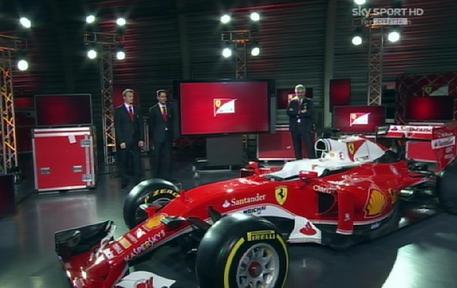 (ANSA) - Rome, February 19 - Ferrari said they were aiming to bag the top prize after presenting their new race car for the 2016 Formula One season, the SF16-H, at their Maranello headquarters near Modena on Friday. The Italian glamour team are aiming to challenge Mercedes' two-year dominance of the sport and end a long title drought.
Ferrari's last constructor's championship win dates to 2008 and the last drivers' title goes back to when Finn Kimi Raikkonen won in 2007 during his first stint with the team.
"Last year the goal was to win three races and we got that, this year we have to aim a little higher and try to win the championship," Ferrari Team Principle Maurizio Arrivabene said at the presentation. "It won't be easy. The competitors won't be sitting on the fence". The SF16-H has more white than usual mixed in with Ferrari's distinctive red, recalling the team's race cars of the 1970s. It also has a higher, shorter nose than its predecessor and a very tightly packaged rear thanks to a more compact power unit.
But these are only the most noticeable differences in a car that has been revised in almost every way with respect to the 2015 model.
"Back in 2013 we were not at the right level - not enough power, downforce, kinematics," said Ferrari Technical Chief James Allison. "We have worked very hard on all those areas.
"Last year was a decent step forward, and we hope this car gives us another good step forward and makes us truly competitive. "It isn't down to one area: we have improved across the board. All our hopes are in this car." Ferrari driver Sebastian Vettel said Friday that he was hopeful the Italian team's new car will be competitive in the 2016 season. "Last season there was a difficult period, there were expectations and difficulties. There's no denying it," said the German, who won four consecutive world titles with Red Bull between 2010 and 2013. "But this year should be great. It will be more powerful than last year. "It (the SF16-H) is beautiful. There has been continuous development and this will keep going. I can't wait to get on the track and I think we'll have a great start".
Vettel's team mate Raikkonen was hopeful too.
"It's exciting to see the new car come alive and obviously we have a lot of expectations for the new car and it looks great, but we have to wait until we get to the circuit and get some laps done," he said.
"Hopefully it will give us a lot of success".