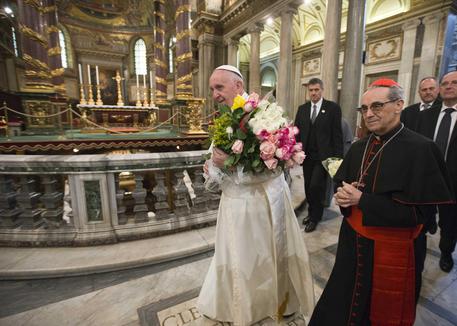 (ANSA) - On board the papal airline, February 18 - US presidential hopeful Donald Trump is not Christian if he says walls must be raised against immigrants, Pope Francis said Thursday.

"One person who thinks of making walls, whoever they are, and not making bridges, is not a Christain, that is not in the Gospel," the pope said on his way back to Rome from Mexico.

Asked if American Catholics should vote for the billionaire Republican hopeful, he said "I can't interfere: all I say is this man is not Christian, if he says these things".

He said "you have to see if he said it or not. I give the benefit of the doubt on this".

Trump has vowed to build a wall on the Mexican border and deport 10 million illegal immigrants if elected.

"The pope is a very political figure," the American billionaire said in reply.  "They're using (him) as a pawn, and they should be ashamed of themselves for doing it".

"For a religious leader to question a person's faith is disgraceful," Trump added. He went on to say "the pope should pray Donald Trump becomes president" because if so, he will prevent the so-called Islamic State (ISIS) fundamentalist militia from attacking the Vatican.

Meanwhile, Francis went on to say that bishops who cover for child-molester priests should resign, and that pedophilia is a monstrosity akin to spiritual cannibalism.

"A bishop who shifts a priest to another parish after cases of pedophilia have come to light is an irresponsible person, who should resign," the pope said on his flight back from Mexico.

Pedophilia is "a monstrosity, because a consecrated priest takes a child from God and eats him up as though in a diabolical sacrifice, destroying him," Francis said.

He went on to say that contraception might be the lesser of two evils for women trying to avoid being infected with the Zika virus, which causes severe birth defects.

"Abortion...is a crime," Francis said. "On the lesser evil - avoiding pregnancy - we are talking in terms of conflicts between the fifth and sixth commandments. Paul VI...allowed nuns in a difficult situation in Africa to use contraceptives in cases of violence". Francis spoke to reporters on his way back from Mexico.

The pope then landed in Rome, where he paid a visit to the St. Mary Major Basilica.