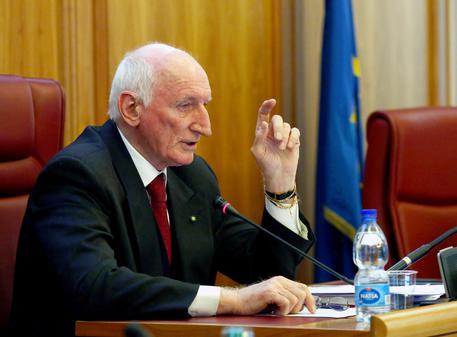 (ANSA) - Rome, February 18 - State Audit Court President Raffaele Squitieri described the government spending review as a "partial failure" at the inauguration of the judicial year on Thursday.
The review of public spending has given "the essential issue of the interrelationship with the quality of services" a back seat, Squitieri said.
The contribution made by the spending review rests not only on efficiency and rationalisation of resources but also on "less targeted operations to reduce, if not suppress, services to the collectivity", he added.
The margin of saving on public spending could be "limited" over the coming years, Squitieri said.
"In a future outlook for public finance that still requires non-marginal spending adjustments to be made, also in order to tackle the complex issue of the tax burden, the margin of saving on the expenditure front could turn out to be limited," Squitieri said. Spending cuts have given "important results on the level of aggregate data" since the start of the economic crisis, the Audit Court president added.
The flexibility obtained from Europe has been "entirely used up" in the 2016 budget, Squitieri said.
"In this way, the drop in the public deficit has been maintained, but at a slower pace," Squitieri. Illegality is favoured by the complexity and proliferation of laws, said Squitieri.
"The complexity and multiplication of laws give illegality more fertile ground for taking hold, rather than defences against or obstacles to its spread," Squitieri said. "The efficient working of the judicial system as the main instrument for countering illegality represents a decisive element in the development and growth of the country," he added.