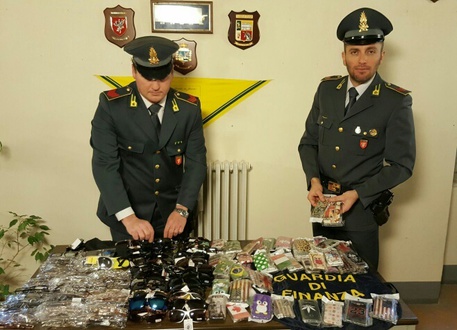 (ANSA) - Florence, February 18 - Finance police on Thursday arrested five people and seized assets worth 42 million euros in a 95-million-euro tax fraud case.
The suspects - who have not yet been named - include a married couple of entrepreneurs, two accountants, and a fifth man who ran the practical and logistical side. They are thought to have perpetrated the fraud in the porterage, freight management and hotel services sectors in the Emilia Romagna, Lazio, Liguria, Piedmont, Tuscany, and Valle d'Aosta regions.
Assets seized included jewelry in gold and precious stones, Cartier and Rolex watches, tens of thousands of euros in cash, nine cars and motorcycles, several bank accounts, shares in five different companies, and nine apartments in Arezzo, Florence, and the town of Robbio near Pavia.
The Vercelli couple managed two consortiums with large-scale commissions from private clients. The consortiums carried out the actual work, while appearing to subcontract the jobs out to seven cooperatives and companies - which in turn issued invoices to the consortiums for non-existent operations, finance police explained. The two accountants managed the chain of false invoicing, which over the years added up to 95 million euros, with omitted business taxes of 44 million, about 22 million in evaded VAT, and other unpaid taxes of 5.5 million euros.
The alleged tax fraud ring also involved a family of professional frontmen, who hosted the legal domicile of some of the cooperatives and companies in their home in the Spagnoli neighborhood in Naples. The family included an 82-year-old pensioner whose name appeared as the executive of many companies with millions of euros in turnover.
A total of 14 people are being probed in the investigation, which began in 2006. Charges include criminal conspiracy to commit tax fraud, tax evasion, failure to declare income, destruction of accounting documents, and issuing false invoices.