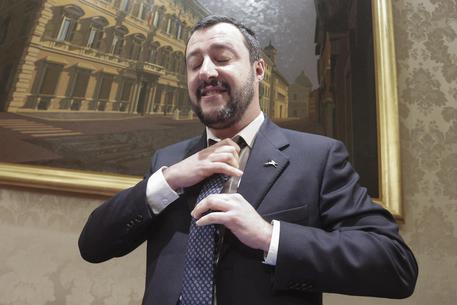 (ANSA) - Rome, February 18 - The centre right's campaign for June's local elections in Rome was throw into disarray on Thursday when Northern League leader Matteo Salvini expressed doubts about mayor candidate Guido Bertolaso. "I won't buy a pig in a poke," said Salvini, appearing to pull back from the endorsement he gave along with Forza Italia leader Silvio Berlusconi and Brothers of Italy (FdI) chief Giorgia Meloni.
Salvini cited Bertolaso's comments on Roma people, who the former civil protection chief recently called a "vexed category," and his praise of former centre-left Rome mayor Francesco Rutelli.
Salvini, who had wanted primaries to select the Rome mayor runner, said these comments "have not been the top for the League". "What the people of Rome say in the next few days will influence my final decision," he added. Asked if the candidacy issue was still open, he replied "every issue is always open".
Former premier Berlusconi on Thursday called off a summit on the centre right's mayoral candidate between Salvini, himself and Meloni as a result of the comments. Meloni said she would only be able to meet her allies once Salvini had "clarified his remarks".
Berlusconi renewed his backing for Bertolaso and said there would be a meeting on Rome candidates on February 24.
"The three centre-right parties, Forza Italia, the Northern League and Brothers of Italy have chosen Guido Bertolaso as their candidate to be Rome mayor," Berlusconi said in a statement. "I'm convinced that Bertolaso is the only professional around who is able to put the capital back on track".
Bertolaso gained praise as civil protection head for his handling of a number of emergencies including the waste crisis in the Campania region around Naples.
As civil protection chief, he was also handed from 2001 to 2010 sweeping powers over major events.
However, he has been indicted over alleged bid-rigging in contracts for the 2009 G8 summit and for allegedly giving justified reassurances before the 2009 L'Aquila earthquake that killed over 300 people.
The anti-establishment Five Star Movement (M5S), meanwhile, on Thursday began online voting to select its mayoral candidate. Registered M5S members resident in Rome could vote for up to five candidates among the 208 in the running from 10 am to 7 pm local time.
The 10 candidates garnering most votes will go through to a second-round ballot, probably on February 23 or 24, to decide who will run against Bertolaso, ex Lazio regional governor Francesco Storace for the right-wing La Destra, probably either deputy Lower House speaker Roberto Giachetti or former Rome executive urban planning councillor Roberto Morassut, both of the Democratic Party (PD), for the centre-left and ex PD member Stefano Fassina for Italian Left. Rome is holding elections following the ouster of PD mayor Marino allegedly over an expenses scandal last autumn. The city is being administered by a special commissioner, former Milan prefect Francesco Paolo Tronca, in the interim. M5S can count on strong support following the Mafia Capitale scandal involving alleged infiltration by a criminal organisation into lucrative city contracts.
The movement's campaign suffered a setback though when M5S MP Paola Taverna prompted ridicule by saying there was a "conspiracy" to make it win in order to "take funds away from and make fools of us".