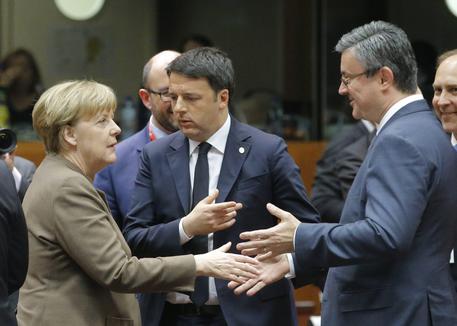 (ANSA) - Brussels, February 18 - Premier Matteo Renzi said upon arriving at a special European Union summit on migrants Thursday that shutting down the Brenner Pass between Austria and Italy is unthinkable. "I realize the situation in Austria is very difficult," he said. "There is a problem. But we can't countenance shutting down the Brenner, which is one of the symbolic passages of Europe".
Austria has set up controls on its side of the Alpine pass and capped at 37,500 the number of asylum seekers it is willing to take in this year - a quota it expects to reach by May, according to Austrian Vice Chancellor Reinhold Mitterlehner.
Yesterday, Austrian Interior Minister Johanna Mikl-Leitner fixed daily entry quotas at 80 for people seeking asylum in Austria and at 3,200 for people passing through on their way to another country. Such moves "would be clearly incompatible with (Austria's) obligations under EU and international law," European Migration Commissioner Dimitris Avramopoulos wrote Mikl-Leitner in a letter of which ANSA obtained a copy on Thursday. Avramopoulos came out against quotas for asylum seekers traveling through the country and urged Austria to "reconsider the unilateral measures proposed".
Also on Thursday, the governors of three bordering regions in Italy and Austria appealed for coordination on Austria's controls, which they say are putting the area's economy at risk.
The appeal came from Bolzano's Arno Kompatscher, Trento's Ugo Rossi and Gunther Platter from Austria's Tyrol state.
Back in Brussels, the Italian premier said the past year's events have "sanctioned" the failure of the Dublin Regulation, which says countries of first arrival must shoulder the responsibility for processing asylum claims.
"I understand some countries are saying the opposite," Renzi said. "Europe has been sweeping dust under the rug for years. Now we will have to talk about it - in this and in the next councils". Renzi also said he was optimistic a deal could be reached to enable British Prime Minister David Cameron to win a referendum and avert a British exit, or Brexit, from the EU.
Cameron is seeking concessions, such as a freezing benefits for new migrants and measures to protect national sovereignty.