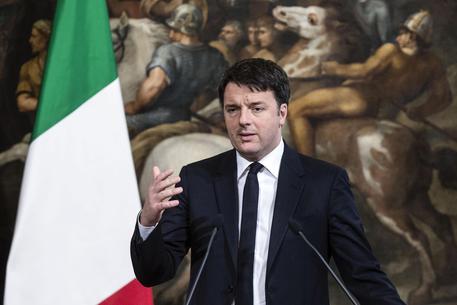 (ANSA) - Rome, February 12 - Premier Matteo Renzi said Friday that it was not up to the Italian Church to decide whether a parliamentary vote on a bill regulating civil unions, including same-sex ones, should be a secret ballot. On Thursday Cardinal Angelo Bagnasco, the head of Italian bishops conference CEI, called for a secret vote on the bill, which many Catholics and conservatives oppose. The appeal led to several lawmakers from Renzi's centre-left Democratic Party (PD) to accuse the Church of meddling in Italian politics. "It is up to parliament and I say that with respect for Cardinal Bagnasco," Renzi told Radio Anch'io when asked about the CEI's call for a secret vote.
"I like the idea that parliamentarians answer to the vote they make and explains it. Then there is the parliamentary regulation, which envisages secret votes, and (Senate Speaker Pietro) Grasso will decide if the necessary conditions exist, not the CEI". The bill now before the Senate would extend to committed gay couples some of the same rights and protections currently enjoyed by heterosexual married couples. Renzi was echoed by the two parliamentary speakers, Pietro Grasso and Laura Boldrini, who reiterated that it was their prerogative to decide which measures should go to an open or secret ballot.
Bagnasco's No.2 at the CEI, Secretary-General Nunzio Galantino, would only say: "I'll say what I said the other day and that is I can't say anything out of respect for the institutions and parliament".
In other remarks Friday, the premier acknowledged that he had often been critical of the European union recently, especially over its perceived insistence on the mathematical minutiae of budget parameters rather than on stoking growth and creating jobs - as well as an alleged reluctance to share the burden of the migrant emergency more widely.
But he stressed that Rome was only trying to make proposals, rather than making waves.
Renzi insisted his frequent criticism of the European Union was constructive and not merely aimed at creating controversy. "Our voice in Europe is not that of someone trying to be an annoyance, but of someone who brings proposals," Renzi told a press conference after meeting European Parliament President Martin Schulz.
Renzi returned to the attack on migrants Friday saying that the European Union must be consistent in supporting the States bearing the brunt of the refugee-migrant crisis. "It has been some time that we have considered the immigration problem to be a European one and that no country can be left along to manage this serious situation," Renzi said after meeting Austrian Chancellor Werner Faymann at his office in Rome. "It is not possible to show solidarity every other day".