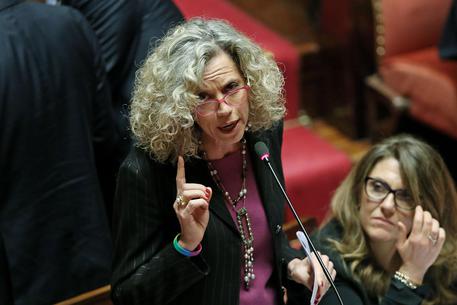 (ANSA) - Rome, February 8 - The centre-left Democratic Party (PD) said Monday it does not intend to remove a clause from its bill on civil unions for same-sex couples allowing partners to adopt each other's biological children.
"The PD does not support removing (the clause)," said Lower House PD whip, Ettore Rosato.
"We're working on a parliamentary majority in order to approve the bill".
Interior Minister Angelino Alfano from the small New Center Right (NCD) party, a junior member of the ruling left-right coalition, has been pressing the PD to remove the so-called stepchild adoption clause or risk losing NCD backing on the bill, currently at its first reading before the Senate.
Health Minister Beatrice Lorenzin of NCD on Monday renewed calls for the provision to be removed from the bill and considered at a later date as part of a review of existing adoption and fostering legislation. Stepchild adoption is also being opposed by some Catholics and conservatives within the PD itself. Matters have been further complicated by an announcement from the leader of the anti-establishment, opposition 5-Star Movement (M5S), Beppe Grillo, leaving his MPs free to vote their conscience on the stepchild adoption clause.
Last week, M5S Senator Alberto Airola said the Movement "won't vote for a watered-down version of the bill, which is why we didn't file any amendments to it".
However it later turned out that the M5S grassroots is divided over whether or not gays should be allowed to adopt their partners' children - as straight couples are allowed to do.
In Italy, children with gay parents currently risk ending up in the foster system if their biological parent dies because the surviving partner has no custody rights.
Also on Monday, members of the center-right Area Popolare (AP) caucus in the Senate said they oppose not just the stepchild adoption clause but other measures that allegedly make civil unions equal to heterosexual marriage before the law.
"And this will bring with it generalized adoptions in any court," said AP Senators Maurizio Sacconi and Nico D'Ascola.
Unmarried couples are banned from adopting children under current law. AP is made up of the NCD plus the small, centrist Union of Christian Democrats (UDC).
Discussion and voting on the bill is due to begin on Tuesday.