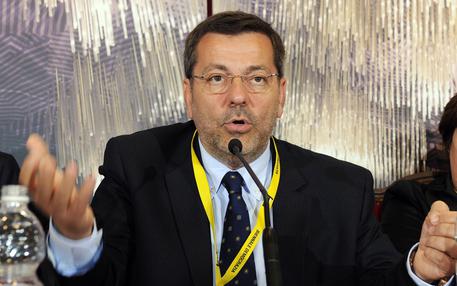 (ANSA) - Brindisi, February 8 - Brindisi Mayor Cosimo 'Mimmo' Consales and his 32-member city council resigned from office on Monday.
Consales, who was placed under house arrest on corruption charges on Saturday, said he is quitting in order to "defend himself".
The mass resignation paves the way for local elections in June.
A former journalist who was elected in 2012 on a Democratic Party (PD) ticket with support from the New Center Right (NCD) and the Left Ecology and Freedom (SEL) party among others, Consales is accused of taking a 30,000-euro bribe in exchange for a contract to manage a waste treatment plant.
Consales, who suspended himself from the PD in 2013, was arrested along with environmental businessman Luca Screti and his administration executive, Massimo Vergara. A fourth suspect, Marcello Caramuscio, remains at large. Screti allegedly paid 30,000 euros in back taxes owed by Consales, with Vergara's help.
Screti will be questioned on Tuesday, prosecution sources said.
The suspects may face charges ranging from corruption and actions contrary to official duties, to fraud in public supplying, defrauding the city, and illegal management of a landfill.