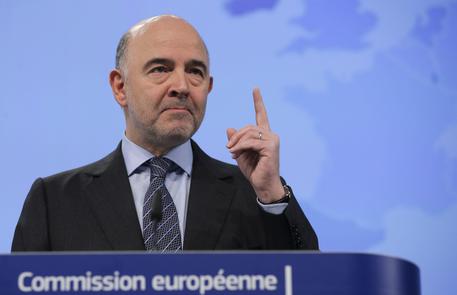 (ANSA) - Rome, February 4 - The European Commission on Thursday raised Italy's deficit forecast and told Rome to listen carefully in upcoming debates about budget flexibility.
Updating a slew of economic data, the EC also said that Italy's big debt - the second highest in the eurozone behind Greece's - was coming down "only slightly".
Economy Minister Pier Carlo Padoan responded by saying that public finances, including the debt, was "under control", while European Central Bank chief Mario Draghi said the ECB would not "surrender" to low inflation.
The EC said that it had raised its deficit-to-GDP forecast for Italy to 2.5% for 2016, up from the 2.3% it predicted in November. "Despite positive growth, the deficit will only come down marginally," the EC said in its winter forecasts. "This reflects the expansionist impact of the (2016) budget law (of Premier Matteo Renzi's government), including 3.2 billion euros in additional spending on security and culture, which increased the deficit forecast in the DEF (Economic and Financial Document) from 2.2% to 2.4%".
The Commission further said that "after the peak of 2015," Italy's public debt in 2016 will fall "only slightly, in part because the structural deficit is deteriorating". The Commission revised up its 2016 debt forecast for Italy to 132.4% of GDP, compared to the 132.2% it predicted in November. It said Italy's debt-to-GDP ratio will be 130.6% in 2017, up from its previous forecast of 130%. But it also estimated that Italy's debt last year stood at 132.8%, rather than 133% in its November forecast.
European Economic Commissioner Pierre Moscovici, for his part, said Italy should show "serenity and an ability to listen" in discussions on budget flexibility. "I am convinced that the spirit of dialogue must prevail over clashes. Serenity, patience, hard work, a mutual capacity to listen to each other and dialogue are needed," said Moscovici when asked when he would reply to Italy's demands for greater flexibility. "You know the rules, the reply to the flexibility requested will be in May, we'll examine demands continuing dialogue with Italy, in a serene and objective, methodical way and with a precise deadline, recalling that Italy is the only (country) that already benefits from a significant flexibility".
The EU will back structural reforms in Italy without betraying the spirit of the Stability and Growth Pact, Moscovici said Thursday. "Italy has received 0.4% of (budget) flexibility for important reforms, then asked for more flexibility for reforms and investments, then asked for more for migrants and, a few weeks ago, asked for a further margin of spending for anti-terrorism and culture spending," he said. Moscovici said there was "an open dialogue of quality" on all this and added "we will respond in May with a spirit of support for reforms but without contravening the spirit of the Pact". The commissioner also slammed Italian media depictions of him as "schizophrenic" in allegedly voicing differing opinions on Italy's flexibility demands. "I don't appear to suffer from this disease," he said.
The European Commission "has not issued Italy a warning on its failed debt reduction" in its debt sustainability report, Economy Minister Pier Carlo Padoan told the Senate. The Commission's macroeconomic forecasts "are not far from the government's September forecasts, when the outlook was more favorable," Padoan said.
Padoan told the Senate that "Italy's public finances are under control and pensions spending is sustainable". Padoan said European Commission analysts believe Italy's debt "can withstand various scenarios", including "significant shocks" from interest rate changes. The minister also told lawmakers Italian banks hold net non-performing loans equal to 88 billion euros, not 201 billion.
"(The latter) is not the number weighing on bank balances, because devaluations and deferments have already been carried out," the minister explained.
Also on Thursday, European Central Bank President Mario Draghi said that there are forces in the global economy that are "conspiring" to hold down inflation. "Those forces might cause inflation to return more slowly to our objective," Draghi added. However, "there is no reason why they should lead to a permanently lower inflation rate," he continued. Forces influencing the inflation rate include demographic change, aging populations, the long-term cycle in commodity prices and technological change including e-commerce, the ECB chief said. Draghi said that the ECB will not "surrender" to low inflation. "The risks of acting too late outweigh the risks of acting too early," Draghi stressed.