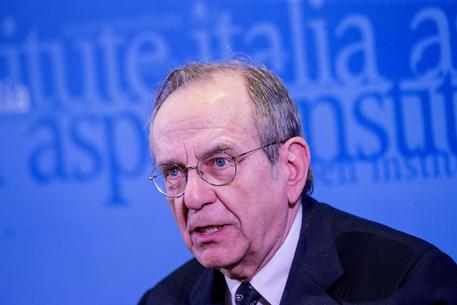 (ANSA) - Rome, February 3 - Economy Minister Pier Carlo Padoan said Wednesday Italy is entitled by basic European Union rules to the budget flexibility it is demanding for the cost of coping with the Mediterranean refugee crisis. And, as Italy stressed the calculation of those costs should be backdated to the start of the exodus from Libya, European Commission President Jean-Claude Juncker welcomed Italy's OK to contributing to a three-billion-euro aid package for Turkey's assistance to Syria refugees.
Italy emerged as the fourth-biggest contributor to that fund Wednesday, behind Germany, Britain and France.
Juncker also said there would be an end to what he called "stupid austerity".
Padoan said that Italy was only asking for European Union norms to be respected by requesting flexibility in the application of budget rules. "Italy is requesting a more flexible management of fiscal policy on the basis of rules that Europe set, not ones that we are inventing," Padoan said during a meeting with British Chancellor of the Exchequer George Osborne at an Aspen Institute forum in Rome.
Padoan voiced the hope that an EU response on Italy's request for budget flexibility for the refugee emergency should be given "soon so as to avoid having uncertainty that does not help growth". Padoan stressed, however, that the government's budget plans would not change and were based on "structural reforms and public investment" to accelerate a sluggish recovery from one of Italy's longest postwar slumps.
Juncker, for his part, hailed the fact that Italy was willing to make its contribution to three billion euros in EU aid to Turkey in exchange for cooperation on the refugee crisis.
"The three billion for Turkey must be made available," Juncker told the European Parliament in Strasbourg. "We all have to respect our commitments. Even the Italian government has said it is willing (to contribute). This is positive and I welcome it". The Commission had criticised Italian Premier Matteo Renzi's executive for allegedly holding up the aid package.
There has been tension between the Commission and the Renzi government in recent weeks over several issues.
The Commission is set to say in the spring whether it has granted Italy's request for flexibility in the application of the EU's budget laws for spending related to asylum seekers. Juncker said Wednesday that the EU executive will not pursue "stupid austerity policies" when it assesses member States' budgets. "It's right for the Commission to examine the State budgets as stipulated by the treaties," Juncker said. "It will conduct its role without following stupid austerity policies. There is plenty of flexibility to permit balances that respect the rules".
Italy expects the European Commission to respect rules on budget flexibility for spending related to the immigration crisis, EU Affairs Undersecretary Sando Gozi on Wednesday told the Lower House's political commissions, presenting the country's 2016 European agenda.
"Italy, once it confirmed its OK to the fund for refugees in Turkey, clarified that the exceptional event cannot only concern a part of the Mediterranean", Gozi said.
"Expenses in managing the migration flow" from North Africa - specifically the upsurge i arrivals from Libya since the start of the crisis there following the 2011 war - "need to be evaluated according to the same rules and the same interpretation", he added.
A deal reached Wednesday by the EU's 28 ambassadors on the three billion euros of aid for Syrian refugees in Turkey envisages a billion euros coming from the EU budget and the other two from member states according to their GDP. Italy's contribution will be 224.9 million euros, the fourth highest after Germany with 427.5 million, the UK with 327.6 million and France with 309.2 million. Spain is fifth with 152.8 million.