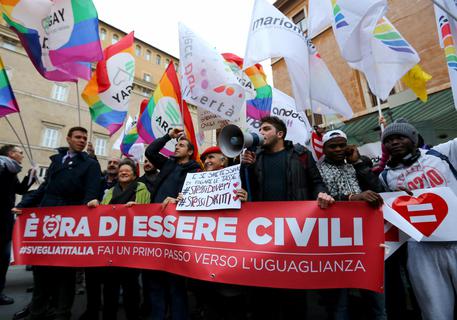 (ANSA) - Rome, February 3 - Interior Minister Angelino Alfano on Wednesday warned Premier Matteo Renzi's Democratic Party (PD) that it would be "traumatic" if the centre-left group voted with the anti-establishment 5-Star Movement (M5S) over a bill granting rights to gay couples. Alfano's New Centre Right (NCD) party, a junior partner in Renzi's ruling coalition, is against the part of the bill that makes it possible for gay partners in civil unions to adopt each other's biological children, as are opposition conservatives and some Catholic PD lawmakers. The NCD has proposed removing the so-called stepchild adoption clause from the bill to make it possible for the ruling left-right coalition to be united in backing it. The PD has so far rebuffed this suggestion.
The opposition M5S has said it will vote in favour of the bill as long as it's not watered down. "(PD Senate whip) Luigi Zanda is pressuring us," M5S Senator Alberto Airola said earlier in the day. "Clearly they're having a lot of internal problems...but we can't go below a minimum level of guaranteed rights". The M5S has debated the issues and is united on its backing of the bill, which is why it declined to file any amendments, Airola added. "If the PD and the M5S vote together on civil unions it will be a serious, negative and traumatic thing," Alfano warned in an interview on La7 television. "We're not threatening a (government) crisis, but I don't think it would be an intelligent move. When there are issues of conscience, the government would be wrong to intervene". In a separate interview with Mediaset television, Alfano said: "The PD has a great chance to regain (the support) of much of parliament... Let's remove this adoptions thing. Most of the Italian people don't want it". Right now the children of same-sex couples risk ending up in the foster system if one of their parents die, because the surviving parent has no legal custody of them. The bill now before the Senate would also extend to partners in a civil union some of the rights heterosexual married couples enjoy, such as the right to inherit a deceased spouse's benefits and property, or to make decisions in their stead should one partner become incapacitated. Italy is the only West European country without gay marriage or civil unions, and the European Court of Human Rights in July 2015 condemned the country for failing to give gay couples legal "recognition and protection", saying the State must change its laws to remedy that. At the weekend, hundreds of thousands of people attended a Rome rally against the bill called Family Day. The previous weekend, even more turned out across Italy in favour of the bill.