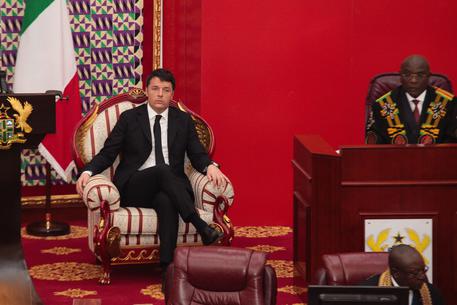 (ANSA) - Accra, February 2 - Italian Premier Matteo Renzi told the Ghanaian parliament in Accra on Tuesday that the European Union appears to have strayed away from the values it was founded upon. "Europe seems very distant from the values of the founding fathers," said Renzi, who has been engaged in a war of words with the European Commission in recent weeks over various issues. "Africa is often considered a problem, rather than an opportunity, especially when it comes to immigration.
But we are committed to changing Europe's direction".

Renzi told the Ghanaian parliament Tuesday that "parliament in every nation is the home of democracy and you must be very proud of your democracy which is a model for your neighbours, and not only them". He stressed that "democracy is the antibody against terrorism". Renzi said "terrorism is in Africa but also in Europe, they want to take away our freedom and our way of life. They want to make us live in fear but we must refuse this message".
Renzi said that war against terrorism was necessary to stop those who were acting to "disintegrate society".

He also stressed the importance of culture in defeating terrorism. Renzi told the Ghanian parliament Tuesday that "a few days ago I was in Mantua which is (Italian) capital of culture this year. Culture helps us to defeat terrorism and fear. The terrorists want to destroy us and if they can't do that they want to make us live in fear. We all must refuse this message". In Ghana Renzi is on the second stage of a three-day Africa trip that started in Nigeria Monday and will conclude in Senegal Wednesday.