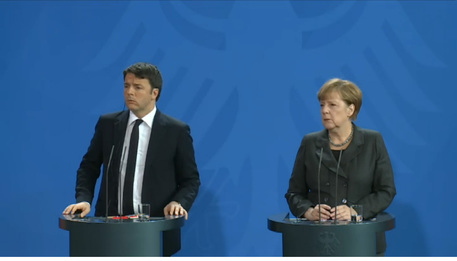 (ANSA) - Rome, January 29 - German Chancellor Angela Merkel on Friday praised the reforms passed by Italian Premier Matteo Renzi on Friday. "Premier Renzi has embarked on a very ambitious reform agenda and the Jobs Act (labour reform) that move in the right direction," Merkel said after meeting Renzi for talks in Berlin.
"The success of these reforms will be an important contribution for Europe and Italy".

Merkel also said at a joint press conference with Renzi after their bilateral meeting in Berlin Friday that the two leaders discussed the refugee crisis "and the accord on Turkey, which must urgently be enacted".

Renzi responded that Italy "is willing to do its part" on the migrant emergency. "We have no problem, either with Turkey or Germany," he said. "We have always been available on Italy's (part of the) financing (of the Turkey refugee fund).
We're waiting for European institutions to give us some answers on some (of our) questions....on how this contribution is to be intended and conceived".

Merkel said that Italy is a key ally in dealing with the refugee emergency. Italy initially bore the greater burden of the flow of asylum seekers from war zones in Africa and the Middle East, she said. "Italy was the country that was most affected," she said. "Things only began to change in April and May (2015), and we were the first to fight for equal redistribution (of asylum seekers). Italy is a very strong ally with regards to the refugee policy, and (Italy's) orientation is fundamental".

Renzi also said that Italy only wanted the EU rules to be respected when asked about his demands for flexibility in the application of budget regulations. "We ask for the EU rules that exist on flexibility to be applied," Renzi said. "We are not asking for new rules"

Renzi addd that "thanks to the efforts of the Italian government, to European collaboration and to our German friends, I am here today with a list of reforms and results, not promises". "Italy is no longer Europe's problem and wants to pull its weight, as is right and as per the history of our country".