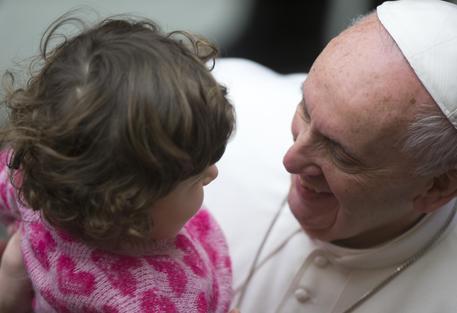 (ANSA) - Vatican City, January 22 - Pope Francis said in a speech for the opening of judicial year of the Vatican's Roman Rota tribunal that the Catholic Church cannot accept traditional families and other types of union being given the same status.
The pope said the Church's recent two-year Synod process on the family "told the world that there can be no confusion between the family as willed by God, and every other type of union". The Church has spoken out against the legalisation of same-sex unions in several countries, although the pope has repeatedly say gay people must never be marginalised. The Italian parliament is currently examining a bill to regulate civil unions, including those between people of the same sex. The Roman Rota is the Vatican court which mainly deals with marriage annulment cases. "The Church continues to propose marriage in its essentials - offspring, good of the couple, unity, indissolubility, sacramentality - not as ideal only for a few - notwithstanding modern models centered on the ephemeral and the transient - but as a reality that can be experienced by all the baptized faithful," said Pope Francis.