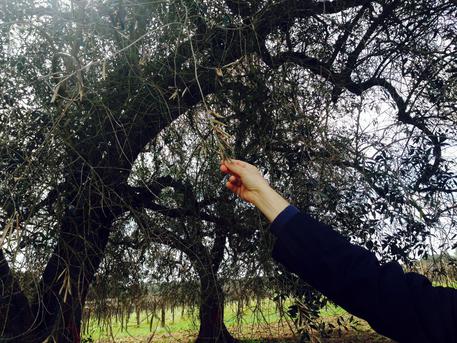 (ANSA) - Brindisi, January 22 - Lazio's Regional Administrative Court (TAR) has decided to send the European Court of Justice the appeal regarding the operation designed to stop the spread of the Xylella fastidiosa disease, it said in a decision published Friday. The appeal was presented by environmental associations and Puglia farmers against the chopping down of olive trees in the region. In May, the TAR issued an order suspending the chopping down of the trees, which remains in place despite the court's Friday decision to suspend proceedings in progress.
In its decision, the Court said it "shares the doubts" brought by the plaintiffs in their appeal, in which they called into question the eradication plan's compliance under European Union law. The anti-Xylella operation is an EU-mandated measure that formed the basis for an Italian ministerial decree and subsequent interventions to chop the trees down, drawn up by former extraordinary commissioner in charge of containing Xylella, Giuseppe Silletti.
Silletti resigned his position in December after being placed under investigation along with nine others who may face charges of spreading a plant disease, malicious violation of environmental regulations, falsifying public documents, forgery, and destroying or damaging natural beauties. In November, the EC sent Italy a letter as the first step of an infringement procedure over the anti-Xylella measure, claiming that Italy is not fully respecting its obligations in the plan to eradicate Xylella.
The Lazio TAR is asking the European Court of Justice in Luxembourg to evaluate whether the principles of "adequacy and proportionality preclude the application" of the decision to chop down the trees. The TAR also cited the lack of scientific analysis proving that Xylella is in fact the cause of the olive trees' infection.
The Xylella fastidiosa bacteria, which infects trees and slowly kills them, was first detected in southern Italy in 2013, marking the first outbreak of its kind in the European Union. It reportedly caused about a million olive trees in Puglia to die as of last summer.
Italy started chopping down affected olive trees in Puglia last April, after the epidemic prompted France to declare an embargo on products from the southern Italian region at risk of infection from the deadly pathogen.
The drastic plan to destroy infected Puglia trees and others seen as being at risk of infection and to create buffer zones to stop the bacteria spreading was drafted after the European Commission demanded "strict precautionary measures".