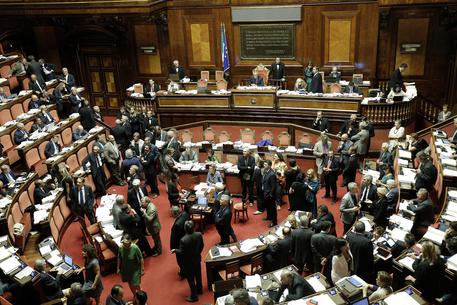 (ANSA) - Rome, January 22 - A total of 6,000 amendments have been filed to the government's civil unions bill which goes to the Senate floor on January 28, sources said Friday. The rightwing opposition Northern League (LN) announced yesterday it had filed over 5,000 amendments. Silvio Berlusconi's center-right opposition Forza Italia (FI) party filed 300 amendments. Senators from the ruling Democratic Party (PD) filed some 60 amendments, with nine of them coming from the Catholic wing of the PD. Most of the opposition as well as Catholics within the ruling majority object to the so-called stepchild adoption measure in the bill, which would allow gays to adopt their partners' biological children.
One PD amendment would empower judges to "verify and investigate" any gay couple in a civil union that files for stepchild adoption. Surrogate motherhood is another controversial issue. On Wednesday, a group of Catholic members of Premier Matteo Renzi's PD filed an amendment extending the punishment against surrogate parenthood to Italians who engage in this procedure abroad. It states that "anyone who, in order to become mother or father, uses the practice of surrogate maternity is punished with a prison term of from three months to two years and with a fine of from 600,000 euros to one million euros". The amendment adds that Italians who have children overseas are obliged to swear that the birth came about without the used of surrogate maternity. It also states that "whoever organises, aids or publicises surrogate maternity should be punished a prison term of from six to 12 years and with a fine of from 600,000 euros to one million euros". Renzi and the PD leadership have been calling for speedy passage of the bill so Italy can catch up to the rest of Europe.

Renzi told a meeting of the PD executive Friday that his government's civil unions bill is "undelayable".

"We're the only country out of the EU-28 without a civil unions measure," he said. "It is crucial we close this out...at the end of the day, a vote will be taken and as is proper, each will be free to vote their conscience on the ethical issues. Compromise is not a tool to delay closure. All positions are rightful but let it be known that for the PD, the reform is undelayable".