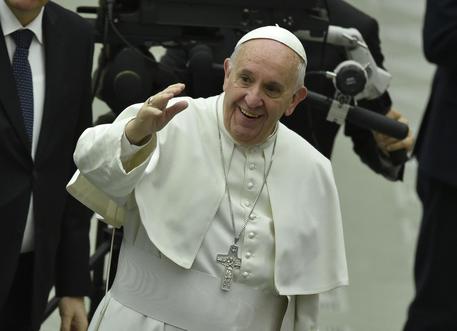 (ANSA) - Rome, January 20 - Pope Francis on Wednesday accepted an invitation from the Islamic Cultural Centre of Italy to visit the Mosque of Rome, said Saudi Arabian Ambassador to Italy Rayed Krimly, who led a delegation to the Vatican on Wednesday to extend the official invitation.
"Recognising the moral and spiritual leadership of His Holiness, in celebrating the Jubilee of Mercy and reiterating the profuse commitment of Muslims in promoting the values of dialogue and fruitful cooperation with believers of every faith, the delegation extended an official invitation to His Holiness to visit the Centre on a date that's ideal for His Holiness," Krimly said.
"It was truly an immense honour and privilege to meet Pope Francis and invite His Holiness to visit the Islamic Centre of Rome," Krimly said.
"His Holiness warmly received and accepted the invitation".
"Independent of our being Muslims, Christians or Jews, we're all in the same boat together, and we can enjoy peace and prosperity if we stay united," he said.
"Christian Arabs, just like European Muslims, comprise an authentic local integrated component of their respective countries".
In addition to Ambassador Krimly, the delegation included Egyptian Ambassador Amr Mostafa Helmy and Moroccan Ambassador Hassan Abouyoub, the Centre's two vice presidents; Abdellah Redoaune, the Centre's general secretary; and Yahya Pallavicini, the Centre's president of the commission for interreligious dialogue.

The move will follow on Francis' visit last Sunday to Rome's Great Synagogue - the third such visit in history by a pope.

The pope's visit takes on special significance given the current world climate of religious violence, fundamentalist extremism and Islamist terrorism.
The image of the leader of the Catholic Church standing side by side with Muslim leaders would send a strong message against violence in the name of God.
The first pope to enter a mosque was John Paul II on May 6, 2001 - just a few months prior to the terrorist attacks of September 11 - when he visited the Umayyad Mosque in Damascus.
On November 30, 2006, Pope Benedict XVI held a silent prayer in the the Sultan Ahmed Mosque of Istanbul - the Blue Mosque - near to where an attack against tourists took place in recent days.
Pope Francis prayed at the Blue Mosque on November 29, 2014, and also visited the Koudoukou Central Mosque in Bangui during his visit to the Central African Republic and other African countries last November.
The Grand Mosque of Rome - the largest in the western world - is located in northern Rome at the foot of the Parioli hills, next to the Acqua Acetosa sporting complex.
Designed by architect Paolo Portoghesi, the Mosque is housed on 30,000 square metres of land and has capacity of up to 12,000 people. It was commissioned and financed by Saudi Arabia's King Faisal, and took more than 20 years to complete.
The City of Rome donated the land for the Mosque in 1974, but the cornerstone wasn't laid until 10 years later, in the presence of Italy's president at the time, Sandro Pertini.
The Mosque was inaugurated on June 21, 1995