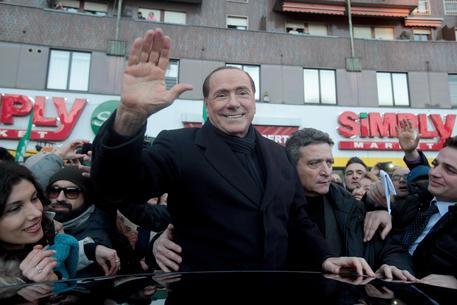 (ANSA) - Rome, January 20 - Silvio Berlusconi on Wednesday described Premier Matteo Renzi's government as an "illegitimate regime". The three-time premier and leader of the opposition centre-right Forza Italia (FI) party also said he intends to continue in front-line politics even though he is 79. "We are in a country that is slave to an illegitimate regime," Berlusconi said at a book presentation. "Renzi is there against the will of the voters". Former Florence mayor Renzi came to power in February 2014 after ousting his predecessor, fellow Democratic Party (PD) member Enrico Letta. "Renzi puts his men everywhere, as seen with the finance police," added Berlusconi. "It's a real regime". Berlusconi also said he felt obliged to keep campaigning. "My sense of responsibility forces me to stay on the field out of love for Italy, without any personal ambitions," he said.
"If I'm not there, we (the centre right) will become the third pole behind the PD and the (anti-establishment) 5-Star Movement". Berlusconi on Wednesday also said that the "worst cancer of our democracy is the Italian judiciary". The ex-premier has had a long series of legal problems and has frequently accused magistrates of attacking him for political reasons.