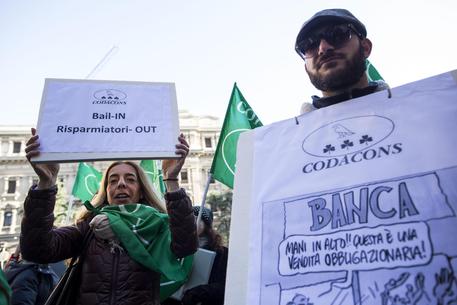 (ANSA) - Rome, January 12 - Approximately 300 demonstrators gathered outside Consob's Rome headquarters on Tuesday to protest against a government measure to save four failed Italian banks and the alleged failure of Italy's stock market watchdog to provide due oversight.
Protesters shouted slogans such as "Thieves, thieves" and brandished banners comparing the banks to Islamic State and attacking Italy's oversight authorities. The 3.6-billion euro rescue, financed by healthy Italian banks, saved jobs and protected account holders, but left shares and bonds in the four lenders worthless.
Many small savers lost money as a result and one, pensioner Luigino D'Angelo, hung himself in November.
Tuesday's demonstration was organised by consumer groups Adusbef and Federconsumatori and a committee investors who have been affected.
The government has said small investors who were conned about the risks of buying the bonds will get compensation, but the savers are demanding full refunds of the money they have lost.