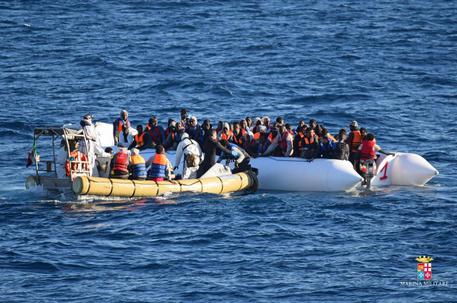 (ANSA) - Rome, January 8 - A decree depenalising illegal immigration is expected to go before cabinet on January 15, government sources said Friday. Being an undocumented immigrant became a crime in 2009 under Silvio Berlusconi, and talk of abolishing that law sparked an outcry from his erstwhile governing coalition partner - the rightwing anti-immigrant Northern League. League Lombardy Governor Roberto Maroni tweeted to "prepare for an invasion" while League chief Matteo Salvini wrote on his Facebook page that his party would launch a referendum "against this shameful thing".
The vast majority of asylum seekers fleeing war in Africa and the Middle East are trafficked in, and do not have proper visas when they arrive - usually in Greece and Italy, whose outlying islands are the first landfall for the unsafe migrant boats sailing from Libya and Turkey.
National antimafia prosecutor Franco Roberti said the current law making illegal immigration a crime "hinders investigations" and prevents the speedy identification of human traffickers. "The data shows (the law) hasn't had a dissuasive effect thus far," he said. Foreign Minister Paolo Gentiloni said new arrivals fleeing war and Islamist fundamentalist persecution in their homelands should receive European-wide asylum - not asylum specific to the EU country they first enter, as stipulated by the Dublin Regulation. "We risk sacrificing Schengen on the altar of Dublin," said Gentiloni, referring to the common visa policy among 26 European countries that abolished passport checks at their internal borders. "The European Union is like an apartment building where everyone fights with their neighbors, except for when they all fight together against the one who watches over the entrance, in this case Greece," Gentiloni said. The foreign minister also said that "for those who don't have the requisites to be taken in, repatriation should also be a European task".
Interior Minister Angelino Alfano said depenalising illegal immigration would send the wrong message at a time of heightened public concern over security in the wake of the bloody Islamist terrorist attacks in Paris in November. It would send "a negative message for the perception of security at a very particular time for Italy and Europe," he said. "The crime of clandestine immigration is not a single-party issue," said Alfano, who was justice minister in the Berlusconi administration that criminalized illegal immigration in 2009.
MP Roberto Speranza from the ruling center-left Democratic Party (PD) tweeted Friday that there should be "no step back on abolishing the crime of being illegal. Politics cannot let itself be guided by fear. Especially today". Speranza is from a dissenting leftwing minority within the PD.