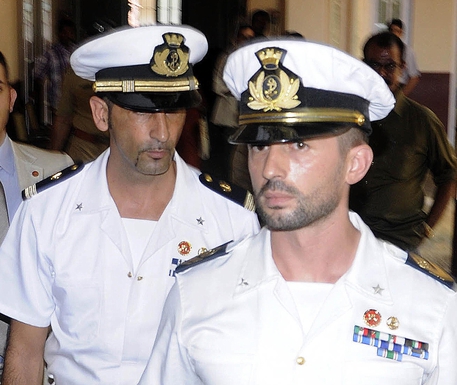 (ANSA) - New Delhi, December 31 - India and Italy are reportedly in secret talks to draw up a 'road map' to end diplomatic tension over the case of two Italian marines accused by New Delhi of killing two Indian fishermen during an anti-piracy mission in 2012, the Calcutta local paper The Telegraph reported on Thursday.
The case of Salvatore Girone and Massimilano Latorre has strained relations between Rome and New Delhi and Italy has taken the case to international arbitration after a long series of delays.
The daily quoted three senior Indian officials as saying that the agreement would "require each to agree to key requests of the other" but that "the negotiations will in no way interfere with the legal aspects of the case being heard" at the International Court of Justice in The Hague and "will not attempt any out-of-court settlement".
If the talks prove successful, India "will not object to any Italian plea before the Supreme Court to allow Salvatore Girone, one of the two marines arrested for shooting dead two Kerala fishermen off India's coast on February 15, 2012, to return to Italy". In August the Hamburg-based International Tribunal for the Law of the Sea stated that India has no jurisdiction over the case, and put the case up to the International Court of Justice in The Hague.
The Indian Supreme Court has suspended all judicial proceedings regarding the two Italian marines in compliance with the Hamburg court's ruling and is due to reassess the situation in January.
Girone is not allowed to leave India and is staying at the Italian embassy in New Delhi.
India granted Latorre leave to return to Italy last year after he suffered a stroke.
Prior to this, however, Italy will have to "commit to withdrawing objections to New Delhi's membership to four key export control regimes - the Nuclear Suppliers Group (NSG), Missile Technology Control Regime (MTCR), the Wassenaar Arrangement and the Australia Group", The Telegraph reported.
As a member of all four clubs "that control the world's trade in nuclear supplies, high-end missiles, chemicals that can be used for weapons and "dual use" technology", which can be used for military purposes, the newspaper noted, Italy "had in September vetoed India's membership application to the MTCR." Another condition laid down by India is that Italy would need to lighten its pressure on the European Union (EU) "against expediting trade deals with New Delhi".