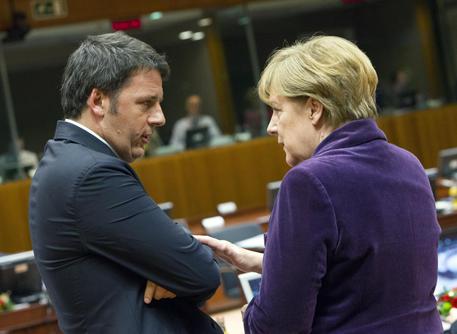 (ANSA) - Brussels, December 18 - Premier Matteo Renzi had a heated exchange with German Chancellor Angela Merkel during the European summit in Brussels in which he said "you cannot tell us that you are donating blood to Europe, dear Angela," sources said on Friday.
The exchange at the start of the second day of the summit when Renzi confronted Merkel about Germany's opposition to rapid completion of the process towards a banking union in the eurozone, the sources said. Merkel is said to have admitted that there have too many delays over this issue due to a series of emergencies that the union has had to face Renzi's stance was backed by several other leaders, including French President Francois Hollande, Portuguese Prime Minister António Costa and Greek Prime Minister Alexis Tsipras. Earlier on Friday Merkel's spokesperson denied speculation that there is a rift between Italy and Berlin over migrants after Renzi said he was against the EU being led solely by Germany. "I don't see any conflict between the German government and the Italian one," Merkel's spokesperson Christiane Wirtz said. "There are intense discussions about refugees at the European level".
The Union needs to change course, abandon austerity and enact policies that will stoke economic growth and create jobs, Renzi told the meeting of European Socialists ahead of the EU summit on Thursday. Sources present at the meeting said Renzi referred to the conduct of German companies willing to do business with Russia while European sanctions are in force.
Renzi's government has also warned the European system to tackle the asylum seeker crisis risks breaking down if the EU does not keep its pledge to relocate thousands of refugees in front-line countries like Italy and Greece, whose outlying islands are the first landfall for people taking to the Mediterranean in a bid to flee war, persecution, and Islamist terrorists in Africa and the Middle East.