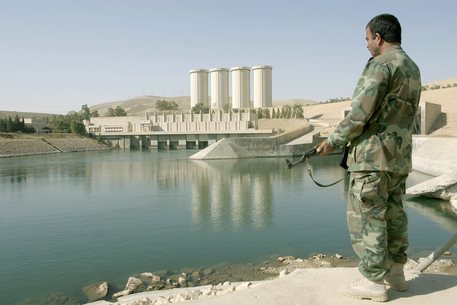 (ANSA) - Rome, December 16 - Premier Matteo Renzi on Wednesday defended his government's decision to deploy 450 military personnel to defend Iraq's damaged Mosul dam while an Italian company shores it up.
"On the military level we're doing the things that are really useful, and rebuilding the Mosul dam is key - we can do it because we're among the best in the world," he told privately held RTL radio earlier today.
Italy's Trevi SpA, which among other things specializes in foundations for dams and bridges, said Wednesday it is in the final phases of negotiation with the Iraqi government for an 18-month contract for "emergency work" on the dam, to begin immediately.
This will be followed up with a "permanent solution to consolidate the dam," Trevi said in a statement.
The earthen embankment dam was built in 1984 on top of gypsum, a soft mineral which dissolves in water. Continuous maintenance is required to grout it and keep it from falling apart.
Renzi announced the move Tuesday on RAI public broadcaster's Porta a Porta talk show. The Mosul dam lies near territory held by the Islamic State (ISIS) extremist insurgency, he said. "It is seriously damaged and if it collapses Baghdad would be destroyed," the premier explained.
American military will also be deployed to protect the dam, Renzi said.
US President Barack Obama on Monday called on the international community to do more to fight ISIS, citing Italy as being among the countries that are already stepping up to the job.
Also on Wednesday, Defence Minister Roberta Pinotti said the troops will not go to Mosul in a combat capacity.
"We are not going to fight, but to intervene to preserve a dam - a piece of infrastructure that is essential to the future of Iraq and one that if abandoned, runs the risk of causing an environmental disaster, " she told RAI's Agora talk show.
"Our troops are going to protect the work of the Italian company that will carry out the intervention on the dam".
Located on the Tigris River upstream of the city of Mosul, the dam built in 1984 by a German-Italian consortium under late dictator Saddam Hussein is ranked the fourth largest in the Middle East. ISIS held the dam for several weeks in summer 2014, until Kurdish Pershmerga fighters and the Iraqi army recaptured it with assistance from US air strikes. "The problem with the Mosul dam is that it was built on rocks containing plastery material which dissolves in the presence of water," said Carlo Crippa, Trevi's area manager for Iraq.
"If cracks open up it worsens the condition of the foundation rocks. It's necessary to intervene by drilling holes and pouring in cement mixtures.
"It was neglected recently and now an emergency intervention is needed".