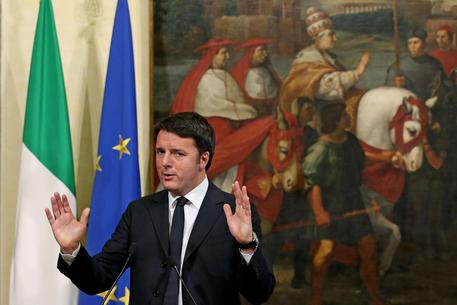 (supersedes previous)(ANSA) - Rome, December 11 - Premier Matteo Renzi said Friday Europe needs Italy to remind it what it stands for. "Europe needs Italy to...make itself heard not in terms of making claims but of recalling what Europe is and must be," he said in a speech at the Lincean Academy, a science academy founded in 1603. "Europe is not an ensemble of algorithms and parameters but a response imagined by its founding fathers - a model that was to guarantee peace...and act as a guiding light for civilization," the premier said. As far as Italy is concerned, his administration is looking to the future and not just overhauling the country to fix the mistakes of the past.
"The government is doing its part," the center-left premier said. "Some may like it and others may not, but we are determined to carry on with our reforms...we're not here to put a patch on things - we want to have a vision for the years to come".
GDP growth is secondary to the fact that the country has just emerged from recession, Renzi added.
"Italy is coming out of a three-year recession," he said.
"The fact that growth may be 0.8% this year and one something next year is secondary...finally this country has taken back its own future". Renzi also mentioned the fate of the Milan site of the six-month Expo world's fair that ended in October. "It is key that the post-Expo area not be simply a condominium of public and private interests but a place with soul that can study how to reconcile quality of life with longer life expectancy, considering that we're second in the world for longevity," the premier said.