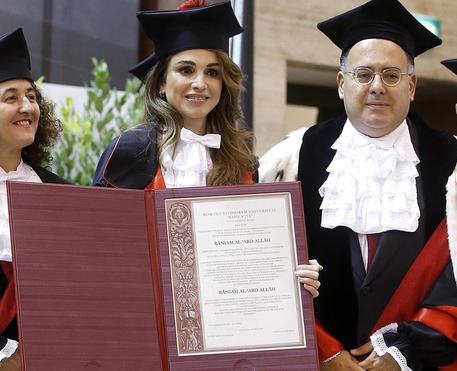 (ANSA) - Rome, December 10 - There's nothing Islamic about Islamic State (ISIS) terrorists, Queen Rania of Jordan said Thursday in the nation's capital.
"They justify their actions by invoking Islam - there is nothing Islamic about these terrorists," Rania said while receiving an honorary degree in International Development and Cooperation Sciences from La Sapienza University.
"The more they invoke Islam for their terrorist acts the more they provoke the intolerance of peaceful Muslims".
The queen added that fearing the terrorists will lead us to fear one another.
"The moment we let suspicion take over, they win," she said.
"So I beg you to continue treating our fellows with respect and an open mind - as we are doing today by honoring an Arab, a Muslim, a woman".
ISIS is not only slaughtering innocents, it is also attempting to destroy our culture, Rania said.
"They are not just killing thousands of innocent men, women and children but also our shared cultural heritage...these are not just attacks on ancient pillars and stones, but on the centuries-old values of our common archeological heritage and of our human coexistence," the Jordanian queen said.
The Islamist extremists "are so deluded they think they can create a new post-Daesh (Arabic for ISIS) era and brainwash future generations", Rania said.