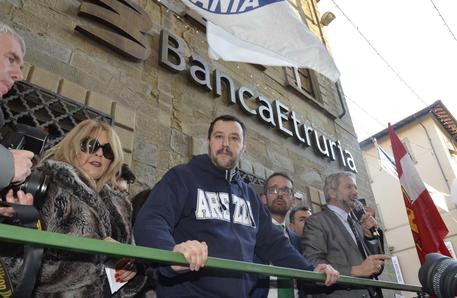 (ANSA) - Arezzo, December 10 - The leader of Italy's Northern League Matteo Salvini said on Thursday that Premier Matteo Renzi should ask the European Union to cover the millions of euros of losses sustained by Italian investors following the rescue of four troubled banks.
The rescue of Banca Etruria, Banca Marche, CariFe and CariChieti saw over 300 million euros' worth of bonds go up in smoke, including 100,000 euros owned by a pensioner from Civitavecchia who committed suicide.
"We are talking about less than a billion euros. If Renzi has the balls, he should go and ask Europe for that," Salvini told a rally in Arezzo in support of the investors who lost their money.
He also called for a minute of silence to remember the pensioner who killed himself.
Renzi said earlier that the government would help shareholders and bondholders left with nothing and stressed that the suicide of the one penniless ex-bondholder should not be "exploited".
"It's impossible by EU rules to definitively save the shareholders and bondholders but we are trying with great commitment and tenacity to find a solution," Renzi said.