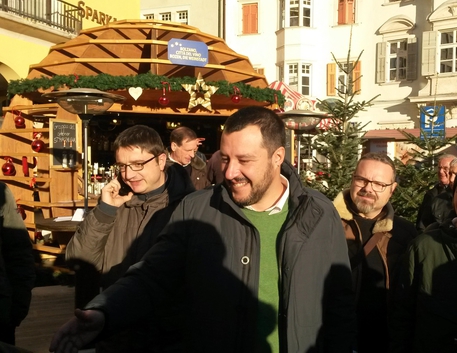 (ANSA) - Rome, December 9 - Rightwing leader Matteo Salvini said Wednesday he will visit Russian President Vladimir Putin next week because he is against "blocs". "I am not anti-Western but I don't believe in blocs, and I believe the role of NATO should be up for debate," Salvini said at the launch of his book, The Salvini Method. The chief of the anti-immigrant Northern League party said he admires Putin's "clear ideas, firmness, courage, interventionism, and a vision of society based on cardinal concepts, which I share".
Salvini also said he met with the Russian chief in Milan, and the fact that Putin chose the League as its sole interlocutor at the time "says it all".
"Putin has no defects!" Salvini said, adding that the League is against sanctioning Russia for annexing the Ukraine's Crimea peninsula last year and its actions in eastern Ukraine and supports its motion to have the sanctions lifted.
"I know Russia loves made-in-Italy products and we're missing out on billions in turnover (because of the sanctions)," he said.