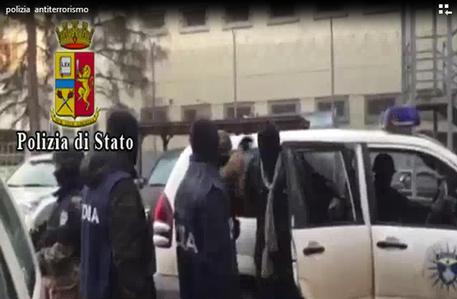 (ANSA) - Rome, December 1 - Four Kosovar nationals were arrested on Tuesday as part of an anti-terrorism operation conducted by Italian police and by the Kosovar authorities, ANSA sources said.
They are accused of apology for terrorism and incitement of racial hatred for allegedly being part of an organization that promoted jihadist ideology. The arrests took place during a series of raids conducted at the same time in three Italian cities and in Kosovo.
Numerous properties were also searched.
Investigators said the suspects had posted photographs on the internet showing them brandishing weapons and that they were radicalised.
The quartet had also allegedly posted an on-line message saying "Remember that there will not be another pope after this one, this is the last".
Investigators identified Imishiti Samet as being the point of reference.
He was arrested in Kosovo and thought to be affiliated to Islamic State.
Interior Minister Angelino Alfano congratulated Police Chief Alessandro Pansa and said that the Italian and Kosovar police forces had done an "excellent job".
Two of the suspects arrested in Italy will be expelled and the third has been placed under special surveillance under new counter-terrorism legislation.