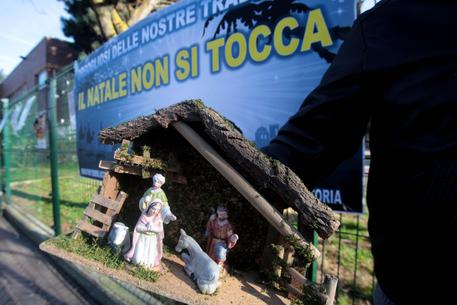 (ANSA) - Rome, November 30 - A row over a northern Italian school allegedly scrapping its traditional Christmas concert to stage a more 'secular' event in order not to alienate students of other faiths continued on Monday despite the principal's attempt to deflate it. Marco Parma, the head of Rozzano's Garofani comprehensive institute, at the weekend denied reports he had taken down crucifixes and said he had not cancelled any planned events in the run-up to Christmas.
He said a concert would take place at Rozzano's Garofani secondary school on December 17 and that its primary school would hold a concert on January 21, as decided at the start of the academic year in September.
"The only request that I opposed was that of two mums who wanted to teach hymns to the Christian children during the lunch break, which I continue to consider inappropriate," said Parma, who has offered to resign, but only with respect to the school's primary section. At the time the decision to hold a winter concert at the primary school in January rather than a pre-Christmas event was made, it did not attract the media's attention.
But with the festival season approaching, it has now.
Monsignor Nunzio Galantino, the secretary general of Italian bishops conference CEI, blasted alleged attempts to cancel or hide Christmas in an editorial published Monday in Catholic monthly Vita Pastorale.
"If this is Christmas, I find the decisions of those who would like to cancel or camouflage Christmas to respect other traditions or religious confessions, making fools of themselves in the process, to be specious and ideological," Galantino wrote.
Interior Minister Angelino Alfano, meanwhile, said he would have traditional nativity crib scenes set up in prefectures across Italy this Christmas. "To those who believe dialogue is assisted by cancelling our identity today we reply by having the new police headquarters in Jesolo blessed by the Patriarch of Venice," Alfano added. "Our position is very clear," the minister continued.
"Meeting and dialogue work better and are more authentic if there is a strong identity. If identity is cancelled there is no dialogue, no meeting, only confusion," said Alfano, adding that a nativity scene would also be installed at the interior ministry this year. Meanwhile Lombardy regional councillor for education Valentina Aprea affirmed her commitment to "returning nativity scenes and religious songs to schools". The authorities "will check where this is not happening, even in the absence of direct competence in the matter", the representative of ex premier Silvio Berlusconi's Forza Italia (FI) party added. Also on Monday, a small crowd of Rozzano residents gathered outside Garofani school to debate the controversy, watched over by police agents. Regional FI coordinator and former education minister Maria Stella Gelmini and leader of the right-wing anti-Europe, anti-migrant Northern League, Matteo Salvini, also paid visits to the school. "If anyone thinks that can help our children by rejecting our traditions, they have lost their mind," Salvini said.
"I hope that the principal takes up another job".