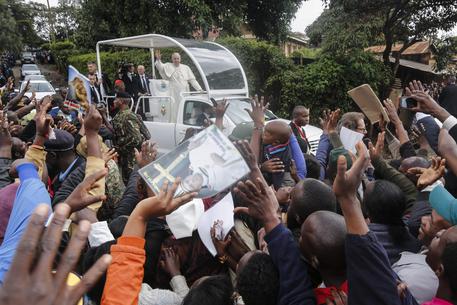 (ANSA) - Nairobi, November 27 - Pope Francis blasted rich people who accumulate money and power, thus creating social marginalisation, during a visit on Friday to Kangemi, a slum on the outskirts of Kenyan capital Nairobi. "Urban marginalisation stems from the wounds caused by the minorities who concentrate power and riches in their own hands and selfishly squander resources, while a growing majority have to seek refuge in abandoned, polluted, discarded areas on the outskirts," the pope said.

Pope Francis told young Kenyan people to reject the "sugar of corruption" during a meeting at Nairobi's Kasarani's stadium later on Friday. "Don't get a taste for it," the Argentine pontiff said.
"Don't accept this sugar called corruption. Corruption takes away joy. "Corrupt people do not live in peace. Corruption is not a path of life. It's a path of death". Pope Francis, who will leave Kenya later on Friday and fly to Uganda for the second part of his Africa trip, admitted that the Holy See was not immune from the plague of graft. "Corruption is in all the institutions, corruption is everywhere, there's corruption in the Vatican too," said the pope, who will also visit the Central African Republic (CAR) during this week's trip. The Argentine pontiff has repeatedly spoken out against against corruption, including within the Church, since being elected the head of the world's 1.2 billion Catholics in 2013.
The Vatican administration and its bank have been hit by several scandals in recent years.
This month it was hit by the so-called VatiLeaks 2 scandal and the related publication of two books using leaked Holy See papers documenting alleged waste, mismanagement and lavish spending by clergymen.
Among the cases to hit the headlines was the 2013 arrest of prelate Monsignor Nunzio Scarano.
Scarano, the former head of analytic accounts at the Holy See's asset-management agency APSA, is suspected involvement in the laundering money through accounts at the Vatican Bank and of trying to illegally smuggle 20 million euros into Italy for rich friends.