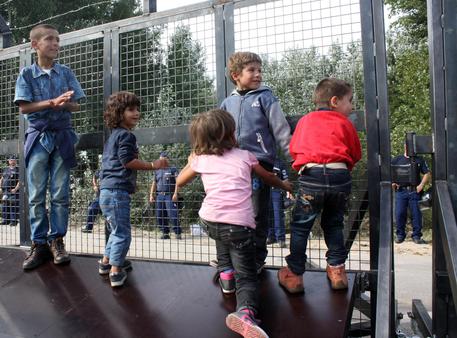 (ANSA) - Turin, November 24 - The city of Turin on Tuesday awarded its Ethics and Sports prize to a Syrian refugee who was deliberately tripped by a Hungarian camerawoman while fleeing a police charge at the Serbian border. Osama Abdul Moshen was running with his young son Zaid in his arms when Petra Laszlo - who worked for the rightwing, anti-immigrant Jobbik party's N1TV local TV station - stuck her foot out and tripped him, making father and child crash to the ground.
The incident was caught on camera, and the video went viral.
Laszlo was fired, and when members of Spain's Cenafe national football coaching centre found out through the media that Mohsen had been a coach for a first division club in Syria, they offered him transportation, a place to stay, and a job as a youth league coach.
"I dedicate this prize to all Syrians," said Moshen, who was in Turin with Zaid and his teenage son Mohamed. His wife and third child are still in a refugee camp in Turkey.
Moshen called for "coordinated European action" to deal with the refugee crisis. Before that, the Syrian civil war must be stopped, he said.
"Russia and Iran could have done so a long time ago by forcing Assad to step aside," he said. "The situation is a lot more difficult now". Asked to comment on the November 13 Islamic terror attacks in Paris that claimed 130 lives, Mohsen answered that "no Muslim would accept the killing of a human being, because Islam is a peaceful religion".