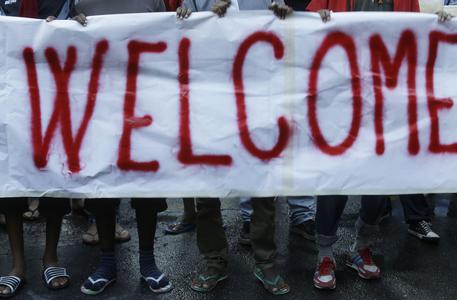 (ANSA) - Rome, November 24 - Police raided a migrant reception centre in Rome on Tuesday, carrying out searches and checking the documents of the migrants present.
Roughly 40 migrants from north Africa, Eritrea and Ethiopia staying at the Baobab centre in Via Cupa near Tiburtina station were taken to the central immigration office for further checks after it emerged their paperwork was not in order. Thirty migrants were instead allowed to remain at the centre, which began life as a cultural association and is run entirely by volunteers.
Around 60 police officers and carabinieri turned up with sniffer dogs around 6.30 am local time, blocking the access routes with armoured vehicles. Volunteers at the centre said their guests put up little resistance and that police had found noting in the searches. "It is the first raid at the Baobab centre and it comes at a specific moment in history," they said.
"But we expected recent international events to have repercussions for our centre hosting refugees and people in transit, some without documents. It was in the air," staff continued.
However they reaffirmed their "concern" over "rumours" that the centre is to be cleared "in the absence of a real alternative for accommodating the migrants staying there". In recent months the Baobab centre has been at the forefront of solidarity efforts on behalf of refugees and migrants in the capital.