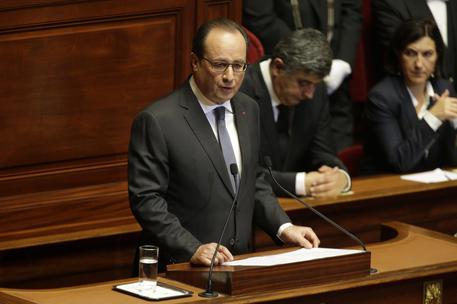 (ANSA) - Brussels, November 17 - The "common defence clause" invoked Monday by French President François Hollande, the application of which was requested and obtained Tuesday by EU defence ministers - for the first time in the history of the EU - is contained in article 42, point 7, first article of Section 2 of the Lisbon Treaty entitled 'Dispositions on common security and defence policy".
After the ministerial green light Tuesday there are no further stages of community procedure envisaged since it concerns a form of solidarity to be agreed bilaterally.
Paragraph 1 of article 42 states "common defence and security policy constitutes an integral part of foreign policy and common security. This assures that the Union has an operational capacity using civil and military means. The Union can make use of such means in external missions to guarantee keeping the peace, preventing conflicts and reinforcing international security, consonant with the principles of the UN charter". "The execution of such duties is based on the capacity supplied by member states".
In paragraph 7, activated by France, it states "whenever a state undergoes an armed aggression on its territory, the other member states are obliged to lend aid and assistance with all the means in their possession, in keeping with article 51 of the Charter of the United Nations". "That does not prejudice the specific character of the security and defence policy of such member states. The commitments and cooperation in this sector remain in conformity with the commitments made in the context of the North Atlantic Treaty Organisation (NATO) which remains, from the States that are members, the basis of their collective defence and the instance of the actuation of the same".
In the 'Treaty on the working of the European Union," article 222, direct intervention is envisaged with military missions of the EU that can be requested in case of terrorist attacks, but in that case the procedure would be much more complex, requiring the unanimous approval of the Council of Europe of heads of state and government.