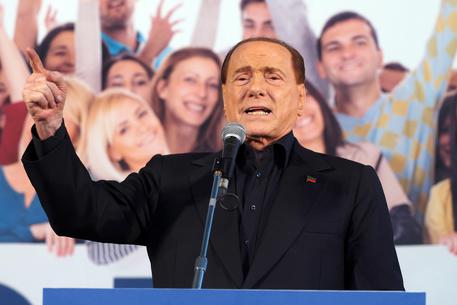 (ANSA) - Rome, November 12 - The centre right has reunited and time will tell who its leader is going to be, former premier Silvio Berlusconi said Thursday.
"We'll see as time goes on," Berlusconi said on State TV RAI's chat show Porta a Porta.
"Now it's very important that the centre right has reunited. That means that we'll put up opposition in parliament together, that hadn't happened in the last few years," he said.
On Saturday, at an anti-government rally of the rightwing Northern League in Bologna, Berlusconi appeared on stage with League leader Matteo Salvini and smaller rightist Fratelli d'Italia leader Giorgio Meloni, telling the crowd that "with the three of us back together, there's no stopping us".
The three parties have yet to agree on who will front the ticket at the next general election, which has to take place by 2018.
Berlusconi said on Porta a Porta: "In the fullness of time we'll find the new leader of the centre right who will be the candidate at the general election that will perhaps take place in two years' time".
He said he had "returned to the field" in view of mayoral elections in cities including Rome, Milan, Turin, Bologna and Naples in June.
The three-time premier acknowledged that the anti-euro and anti-immigrant League was ahead of his Forza Italia in the polls - at 14-15% compared to 9-10% - but said he was "happy to have the coalition back together".
He said he had a "good relationship" with Salvini that will "produce an accord" on future leadership.
The media magnate said he did not see "a huge difference" between Salvini and his predecessor Umberto Bossi with whom Berlusconi ruled Italy for several years.